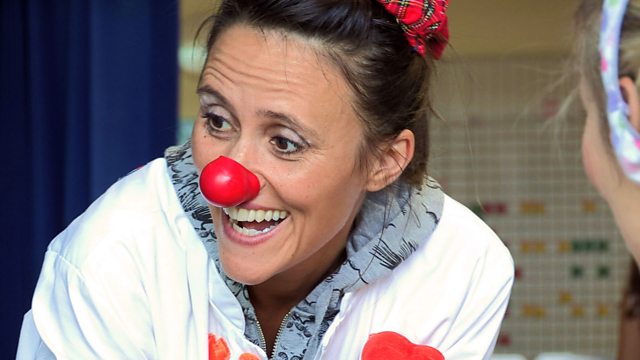 Over two years, ventriloquist Nina Conti donned a red nose and swapped comedy clubs for a harder stage - a children's hospital. Did she raise a laugh or cry the tears of a clown?

Award-winning ventriloquist Nina Conti and her much-loved puppet Monkey are a huge hit in comedy clubs around the world and stars of Live at the Apollo. But now she wants to put her skills to a more meaningful end on a much more difficult stage - entertaining children in hospitals.

This film follows Nina as she trains as a giggle doctor with Theodora Children's Charity, beginning with her trying to find her clown persona, who might be Scottish... or might not. Devastated by the discovery that Monkey can only perform in hospitals if he can be boil-washed, Nina tries to go it alone with only a red nose, a few misshapen balloon animals and some slightly disappointing magic tricks. Not to mention her professional snobbery rearing up as she finds herself turning into a baby-voiced children's entertainer. Then there are the difficulties she encounters when faced with clown phobia.

Following her directorial debut with Her Master's Voice which won a Grierson Award and a BAFTA nomination, Nina Conti brings us another frank and intimate documentary about her eventful two-year stint as a hospital clown. Join her to discover whether Nina raised a laugh amongst sick children or whether she cried the tears of a clown.

See all clips from Nina Conti Clowning Around (3)