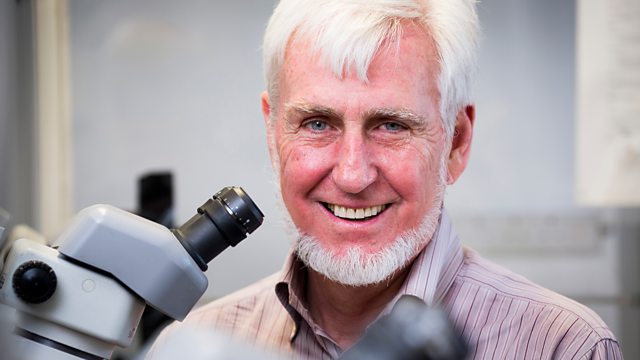 John O'Keefe talks to Jim Al-Khalili about winning the 2014 Nobel Prize for Physiology or Medicine, his love of basketball and the joy of listening to brain cells firing.

John O'Keefe tells Jim Al-Khalili how winning the Nobel Prize was a bit of a double-edged sword, especially as he liked his life in the lab, before being made famous by the award.

John won the prize for his once radical insight into how we know where we are. When he first described the idea of 'place cells' in the brain back in 1971, many scoffed. Today it's accepted scientific wisdom that our spatial ability depends on these highly specialized brain cells.

A keen basketball player,John says, he has put this principle to the test by trying to shoot hoops with his eyes closed. But this belies the years of painstaking experiments on rats that John performed to prove that a rat's ability to know where it is depends not only on its sense of smell, but also on a cognitive map, or internal GPS, inside the rat's brain.

He describes how he listened in on the unique firing patterns of individual rat brain cells using the tiniest electrodes: "You almost imagine they are singing to you", he says, as he imitates the different sounds made by individual neurons. And, he says, he misses them when they fall silent.

It's important to John, and for his results, that his rats are happy and John welcomes the strong controls over animal experiments in the UK. Computer models are useful but, he says, they could never replace the need for experiments on animals, in the work that he does. And,while it need not necessarily have been the case, experiments on rats' brains have provided valuable insight into the workings of the human brain. John's research was entirely curiosity-driven but it could provide vital clues to understanding dementia and is already being used to develop a test for the earliest stages of Alzheimer's.