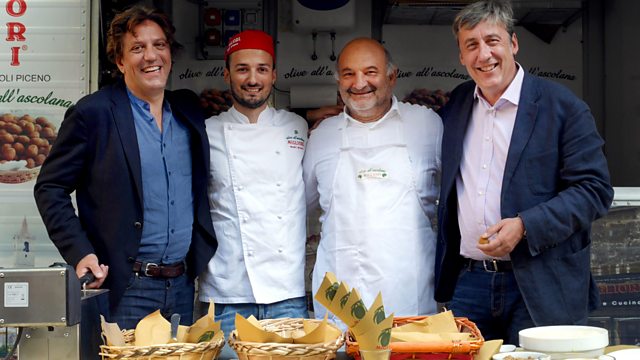 To the Centre of the Earth

Andrew Graham-Dixon and Giorgio Locatelli explore the culture and cuisine of the east coast of Italy. They visit the regions of Le Marche and Umbria.

The second leg of Andrew Graham-Dixon and Giorgio Locatelli's journey takes them to the heart of Italy and the regions of Le Marche and Umbria.

After a snack of Le Marche-style stuffed olives they uncover the Renaissance city of Urbino and the palace of Federico da Montefeltro. Scholar, connoisseur and commander of a private army; Federico is one of the driving forces of the Italian Renaissance. Then, in the dark depths of the Apennine Mountains, they explore one of the largest underground caves in the world, the Grotte di Frassasi.

In Umbria, the green heart of Italy, Andrew shows Giorgio one of the greatest Renaissance paintings by Pinturicchio in the little town of Spello. Giorgio takes Andrew to the Norcia Valley, where for centuries people have made mouthwatering pork sausages and salamis. Giorgio makes a succulent dish using the ingredients from the fertile land - fresh pork sausages and lentils.

From the Stones to the Stars—Series 3

See all episodes from Italy Unpacked 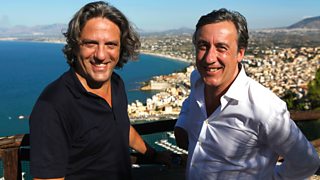