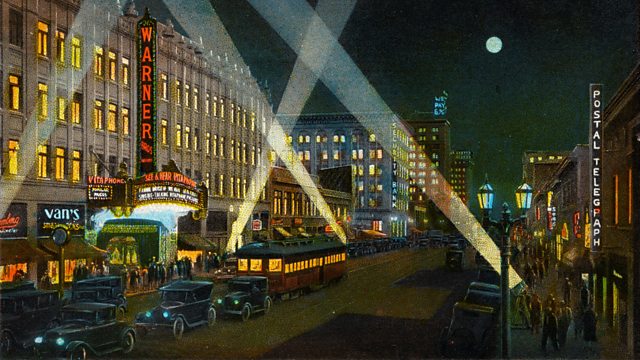 The Day of the Locust

Adam Smith explores Nathanael West's great 1938 Hollywood novel The Day of the Locust and its roots in the political turmoil of its time.

When the novelist Nathanael West died in a car crash in 1940, he thought his last book, The Day of the Locust, was a humiliating failure. But today, it is heralded as a major twentieth century classic.

West was a New Yorker who had gone to Hollywood to earn money turning out scripts, and Day of the Locust is his dark, sardonic take on the promise of Hollywood, and of California - which attracted thousands to the Golden State in the Depression years of the 1930s. Amidst the sunshine and the oranges, West saw a middle class boiling with frustration. His early title for the novel was The Cheated.
The book ends with a movie premiere transmogrifying into a murderous riot - at the heart of which is a character called Homer Simpson.

So in this programme, historian Adam Smith travels to Los Angeles to unearth the roots of the novel in the political turmoil of the time. West saw his climactic mob scene as a prophecy of America descending into civil war. Adam traces how two young men living in Los Angeles as West wrote the novel were to go on to channel the resentments West divined into a political movement which swept America.

A young would-be film star turned down work at the studio where West worked - and was living four blocks away from West as he wrote Locust. Ronald Reagan would go on to become Governor of California by tapping into middle class fears and loathings. And a few miles away, a young, awkward lawyer, Richard Nixon, was already shaping his skills at 'doing the people's hating for them' - a talent that would take him, too, all the way to the White House.

Adam visits West's old haunts and mingles with the crowd at a contemporary movie premiere, in a bid to understand the very Californian frustrations West saw all around him. He explores how, finally, in the 1980s, Reagan - once a thwarted actor - was able to fuse middle-class resentments with a sunny Hollywood optimism, in a political alchemy that transformed America.

From Convent to Concert Hall