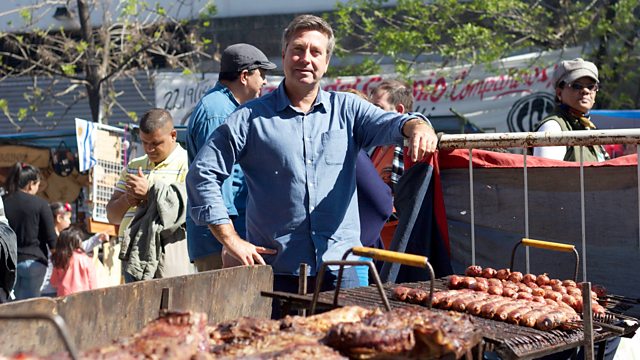 A Cook Abroad
Episode 3 of 6

MasterChef judge and meat connoisseur John Torode fulfils a lifelong ambition to go to Argentina, where eating beef is a national obsession.

After savouring the street food from the barbecues, or 'asados', in Buenos Aires, John embarks on an epic road trip that takes him across the vast pastures of the pampas to Mendoza in the foothills of the Andes. His mission - to find the best piece of steak in the world and the best way to cook it.

Along the way, John discovers that modern industrial farming has changed the landscape of the legendary pampas and threatened a way of life unchanged for centuries. In order to learn the traditional ways of rearing cattle, he goes native with the gauchos on a working estancia and experiences one of the most authentic barbecues he's ever had. Back on the road, when John stops at a truckers' cafe to have lunch, he has an epiphany. He grasps the secret of cooking with fire.

His final destination is a fabled restaurant in Mendoza, where cooking beef has become an art form. It's here, among the restaurant's seven fires, that John learns his final lesson.

See all episodes from A Cook Abroad