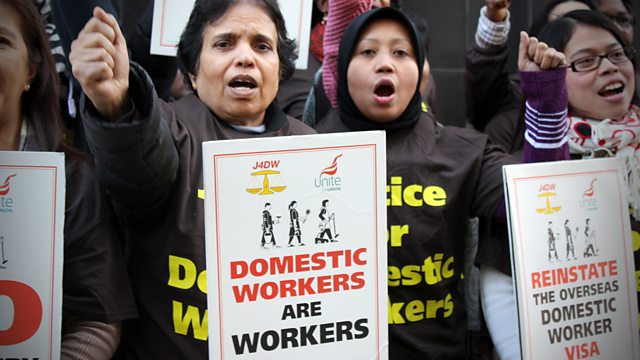 As Parliament passes a new law to abolish modern slavery, John Waite tracks down victims whose lives as slaves in Britain will continue unabated.

As Parliament passes a new law to abolish modern slavery, John Waite tracks down victims whose lives as slaves in Britain will continue unabated.

We hear from domestic workers, who come to the UK on visas "tied" to their employers - meaning their right to be here is solely at the behest of their employers. As it stands campaigners say it's a charter for cruelty and abuse.

Protection is even less for similarly employed domestic workers who come here to clean, cook and childmind for diplomats. Even when their working conditions are deemed unacceptable by an employment tribunal - the employer need only cite "diplomatic immunity" to defeat their claim. One worker tells us that the long, unpaid hours she worked, were, in effect defended by our own Foreign and Commonwealth Office, as being within the scope of "diplomatic immunity."

Finally we hear how a "transit visa" is being used to bring in recruits to the fishing industry who (they are told), have no right to set foot on dry land. Instead the workers spend weeks at a time out at sea, sleeping in cramped conditions. As a final insult, they can find they haven't been paid at all by the Filipino agent who fixed the job for them.

Face the Facts asks why the new legislation has failed to address the dismal lives of these hidden but perfectly legal slaves who've been tricked and trapped into a life of exploitation.