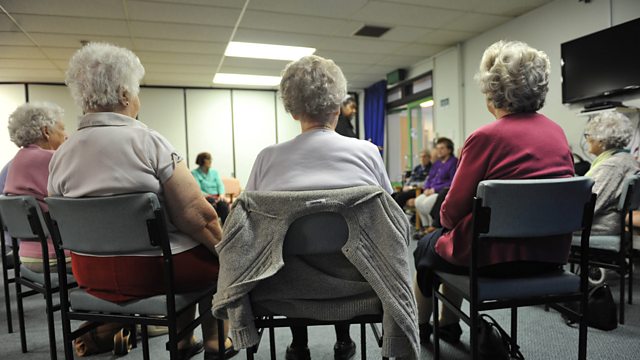 The rising cost of caring for the elderly, Meryl Streep from the Woman's Hour archive, Viv Grant on giving leadership advice to head teachers and teenage novelist Helena Coggan.

According to pre-election research done for Woman's Hour the cost of caring for a family came out as the third most important issue for women. Jenni looks at the rising cost of caring for the elderly. This year Meryl Streep received her 19th Oscar nomination for her supporting role in 'Into the Woods'. From the Woman's Hour archive, the actress speaks to Sue MacGregor about coping with fame, how she never set out to be a movie star and the joys of motherhood. Viv Grant discusses leaving her job as a head teacher to provide leadership and support for people in her former profession. Fifteen year old Helena Coggan discusses her debut novel The Catalyst.

DSK, what do French women think? Why do parents keep quiet about their children's mental ill-health?Jean Harrod

The Cost of Caring For An Elderly Person

According to pre-election research done for Woman's Hour by TNS BMRB the cost of caring for a family came out as the third most important issue for women as they think about how to cast their vote on May 7th. Jenni looks at the rising cost of caring for the elderly. Approximately 420,000 people are currently living in care and nursing homes across the UK, while about 1 million get help in their own home. There are another 1.5 million people who rely on friends and family for support. Next year the cost of care will be capped at £72,000 for people who pay for themselves over their lifetime, but in residential care they will be expected to pay their board and lodging, currently estimated at £12,000 a year. So how will social care be paid for  and what are the political parties doing to address the issue? Jenni Murray hears the experiences of a group of women from Solihull and speaks to Janet Morrison, Chief Executive of the charity Independent Age and Allegra Stratton, Political Editor of BBC 2 Newsnight.

This year Meryl Streep received her 19th Oscar nomination for her supporting role in ‘Into the Woods’. Streep has more Academy Award nominations than any actor or actress in history, winning Oscars for Best Supporting Actress for Kramer vs. Kramer (1979) and Best Actress for Sophie's Choice (1982) and The Iron Lady (2011). Streep, who sings in ‘Into the Woods’ and wore prosthetics on her face and gnarly teeth to transform into a vindictive old witch, will be hoping to take home her fourth Oscar on Sunday. From the Woman’s Hour archive, the legendary and versatile actress speaks to Sue Macgregor about coping with fame, how she never set out to be a movie star and the joys of motherhood.

Back in 2001, Viv Grant was a very successful headteacher, who had turned a failing primary school around. This success however came at a cost - the sacrifice of her own family life, acute isolation and endless self-doubt.  Everyone looked to her for leadership, but she had no-one to talk to.  Eventually she left her job to found an independent support service for school leaders. Viv talks to Jenni about her experience, and the importance of meeting headteachers’ emotional needs.

Helena Coggan is fifteen, studying for her GCSE’s and her debut novel is being published this week. The Catalyst is a fantasy novel set in a future version of London, where the population are divided into those who are magically Gifted and mere mortals, the Ashkind. Helena talks to Jenni about sitting down to write the book age thirteen, female heroines and the type of book she wanted to write.