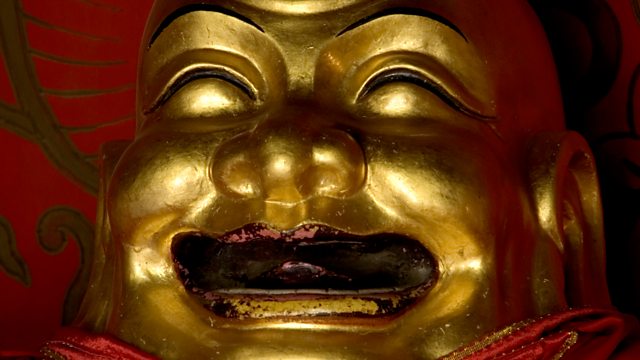 Buddhism has a reputation as a religion of tranquillity and calm. Indeed, mindfulness, a type of therapy derived from Buddhist meditative techniques, is often touted as a powerful method for treating depression and anxiety. It is even available on the NHS in some areas. But in the Buddhist tradition, practices related to mindfulness are connected to a sophisticated philosophy often radically at odds with Western views of the world. Rana Mitter is joined by Mark Vernon, a therapist who uses mindfulness in his practice, and by the Buddhist philosopher Rupert Gethin to discuss various attitudes towards mindfulness, and how far the practice can be removed from its Buddhist intellectual background.

Like any other religion, Buddhism has had to negotiate a relationship with secular sources of power. In the 20th century Japanese Buddhism had to contend with a particularly violent form of militarist nationalism in the run-up to the Second World War. Rana is joined by a sociologist who has studied the relationship between religion and politics in Japan, Anne Mette Fisker-Nielsen, and by the historian of Japanese Buddhism and Radio 3 New Generation thinker, Christopher Harding.

Finally, Buddhism has meant many things to many people: at some times it has been touted as the exemplar of a 'rationalist' religion that depends upon experience and argument; at others it has been presented as an antidote to overly-rationalistic 'Western' thought. Are these just different ways outsiders have appropriated the religion for their own purposes? What role does rationality play in Buddhist thinking?

Landmark: The One Thousand and One Nights Yesterday and Tomorrow