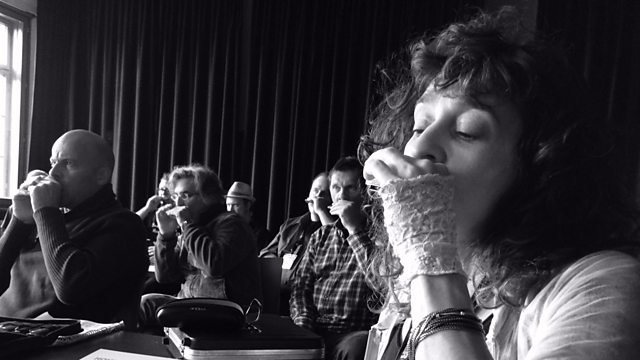 Kim Addonizio meets the world's top blues harmonica aficionados in the capital city of 'harps' - where the streets echo with the sound of the small organ with a big noise.

Imagine a town of harmonica players; sounds a bit surreal?

Now 'Between the Ears' gives listeners a chance to hear the harmonica as a truly virtuoso instrument, always an instrument of the people - portable, affordable and playable. Acclaimed poet Kim Addonizio turns harmonica student, heading to blues school with pen, mouth, and a stack of harps at the ready, in search of the sweetest sounds.

Trossingen in Germany may be the world capital of harmonicas. Every street echoes to the sound of the harp, and even the downtown hotel is part of the old Hohner Factory. This is where you will find the true aficionados, the hard-core addicts, who come to have lessons with the top players.

Kim learns riffs from the world’s top ‘harp’ teachers, Dave Barrett, Steve Baker and Joe Filisko - who customizes harps for such as Neil Young, blues great Kim Wilson, and jazz phenomenon Howard Levy, and who she wants to persuade to accompany her on his magical harp.

She also dreams of being the first woman to jam on stage at the Blues conference... so will her dreams become reality?