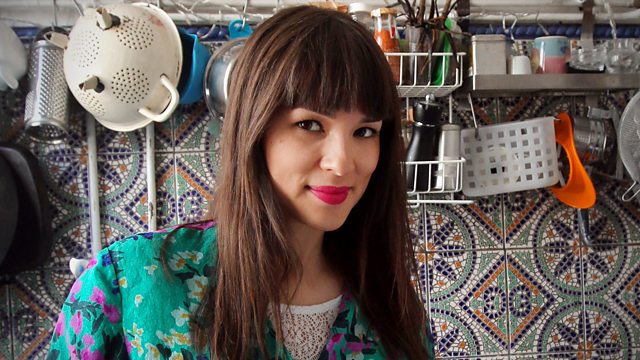 TV presenter Rachel Khoo and bestselling author of The Little Paris Kitchen joins Aasmah Mir and Richard Coles to talk about her new personal cookbook. Kitchen Notebook sees Rachel move on from French cooking to give us a collection of recipes from her around the world travels.

Alan Radbourne was about to graduate from University when he found a pound coin on the floor. He had a thought- could he could turn a quid into a salary after he graduated? Two days after his final exam he bought a bottle of washing up liquid and started a year-long challenge. He charged his mates to wash their dishes - every penny he made he re-invested and it snowballed from there. Exactly a year on he had made £20,000.

They say you're never too old for love and Colin and Patricia Stevens agree. They were only five years old when they first met at primary school and for Colin, it was love at first sight. But the girl of his dreams moved away when she was fifteen years old and they lost touch. Over the years they thought about each other off and on. Occasionally they made contact. But, now in their seventies and approaching their first wedding anniversary they tell us about the rocky path of true love.

The Dull Men's Club has more than 5,000 members who are passionate about everyday mundane things. Archie Workman kicks off a short season focusing on British eccentrics by telling us about his fascination with drain covers and why they're more interesting than we might think.

Natalie Merchant, the American singer-songwriter/musician and a former member of the band 10,000 Maniacs, shares her Inheritance tracks. She inherited The Games People Play by Petula Clark and is passing on her own song, Wonder.

Natalie Merchant's latest, self-titled album is out now on Nonesuch Records. And this summer a 20th anniversary edition of her Tigerlily album will be released.