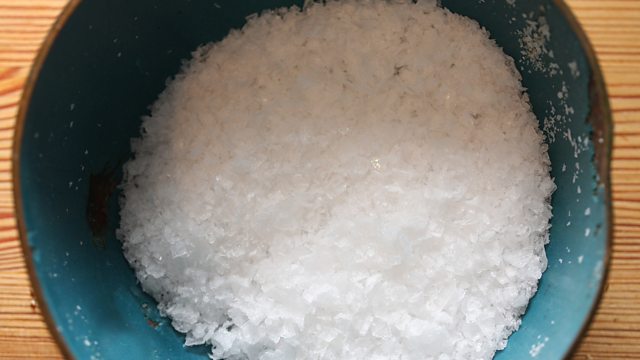 Steph McGovern discovers that salt is much more than something to season our food with, explaining its fascinating role in economic, political, linguistic and social history.

It's easy to take salt for granted - its abundance on supermarket shelves, coupled with the development of refrigeration and freezing for our food, means we can all too readily overlook its vital and multiple role in our history. In part one of 'Salt', BBC Breakfast's Steph McGovern sets out to explain this role. She hears how it has taken root in our language, visits a chemistry class to find out about how it's produced and its importance to our physical well being, talks with history professor Peter Wallenstein about the unexpected importance of salt in military strategy right up until the 20th Century, and also Pierre Laszlo who explains how salt not only helped shape economies and cities like Salzburg, Munich and Venice, but also played a crucial role in revolutions across France, America and India. Steph also visits a graveyard and hears talk of the tradition of sin-eating at Welsh wakes, an illustration of salt's widespread place in religion and superstition across the world. Finally she talks with a commodities expert to discover just how much salt is worth today - significantly less than the days it was traded like for like with gold.
This is part one of a two part series; in the second instalment Steph will explore in more detail the role of salt in food, looking at its growth as an attractive artisan product, and also consider the health warnings against over-consumption of salt.

See all episodes from Salt