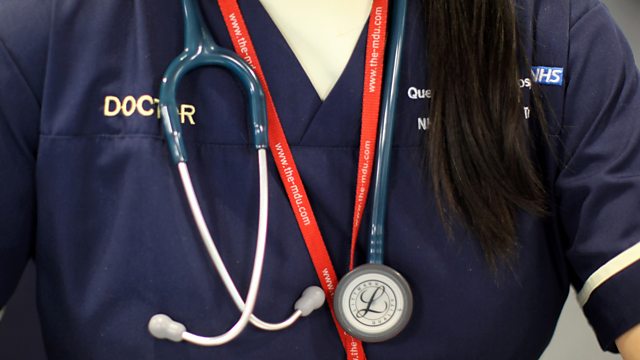 Jenni Murray presents the programme that offers a female perspective on the world, including the NHS, Deeyah Khan and women in construction.

A recent poll for Woman's Hour on politics indicated that the NHS was the number one issue among women. BBC Health Correspondent Branwyn Jeffreys reviews the issues and we are joined by GP Dr Catherine Glass and Dr Jennifer Dixon, CEO of the Health foundation to talk about their concerns.
Deeyah Khan signed her first record deal in Oslo aged 13, but repeated harassment and threats from her own community led to her abandoning her career and leaving her family. Since then she has become a film maker and activist, passionate about freedom of expression. She tells Jenni her story.
We hear about parenting in Shakepeare's plays - today focussing on disobedient daughters.
And, as the government launches a new campaign to get more women into construction we're joined by Roma Agrawal, who was a senior member of the team that did the structural engineering on the Shard in London.

Sterilisation in Your Twenties

A poll for Woman’s Hour to look at how women voters are feeling ahead of the general election put the NHS as their top area of concern. Jenni looks at what that means for patients, their relatives, people working in the NHS and policy makers. With Dr Jennifer Dixon, Chief Executive of The Health Foundation; G.P. Dr. Catherine Glass and Branwyn Jeffreys BBC Health Correspondent.

The first in a series exploring parenting in Shakespeare’s plays -disobedient daughters, prepared to defy strict (and possessive) fathers for love.  Reporter Judi Herman talks to actors playing both parent and child, and also to Pippa Guard, lecturer in Drama and English at Greenwich University.
Romeo and Juliet, opens in Bristol on 19 February and tours the UK to 27 June.  The  Merchant of Venice is at the Almeida Theatre in London to 14 February; and Othello opens at Shakespeare’s Globe on 26 February, where it's this year’s ‘Playing Shakespeare’ production, specially created for young people.

Shakespeare at the Tobacco Factory
http://www.tobaccofactorytheatres.com/shows/detail/romeo_and_juliet1/

As a teenager Deeyah Khan abandoned a promising singing career because of violent harassment by Islamists. Since then, over twenty years later as a film-maker and activist, she is a passionate advocate for the freedom of expression.  She talks to Jenni about being forced to leave her home, family and career and start a new life campaigning for the rights of women.

Listen again to Jenni talking to Caroline Goode, the DCI featured in Deeyah's documentary 'Banaz', who headed the investigation into the 'honour' killing of 20 year old Banaz Mahmod.

From childhood structural engineer Roma Agrawal dreamt of building sky scrapers. She talks to Jenni about how she ended up designing the top of the London Shard.