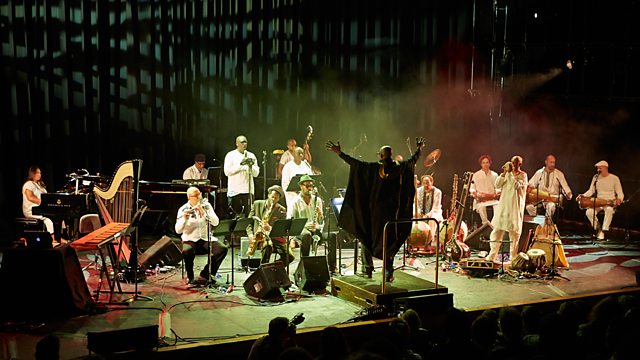 Enlightenment (In the Spirit of A Love Supreme by John Coltrane)

Jez Nelson presents a concert given at the 2014 Meltdown Festival in which the Enlightenment Ensemble performs a new arrangement of John Coltrane's classic album A Love Supreme.

Fifty years since its original release, A Love Supreme remains one of the most celebrated and sacred works in the jazz canon. To mark its anniversary at the 2014 Meltdown Festival, British flautist and composer Rowland Sutherland took on the challenge to write a new arrangement for the 14-piece Enlightenment Ensemble, directed by Black Top's Orphy Robinson. Their performance draws on Coltrane's global spirit, channelling ideas from different cultural and musical backgrounds - with voices, kora and bata drums integrated alongside Robinson's xylosynth and traditional jazz instrumentation. Among the line-up, saxophonist Steve Williamson delivers stunning Coltrane-esque bursts on the tenor, bass clarinettist Shabaka Hutchings provides some of the set's standout solos while drummer Mark Mondesir grooves ferociously. It's at once a joyous homage and an inventive exploration of new territory.