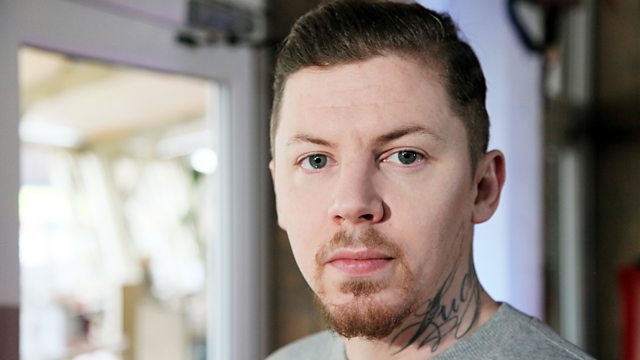 Rapper Professor Green makes an appeal on behalf of the Campaign Against Living Miserably, CALM. This charity fights to prevent male suicide.

Rapper Professor Green makes an appeal on behalf of the Campaign Against Living Miserably, CALM. This charity fights to prevent male suicide - which is now the single biggest cause of death in men aged 20-45 in England and Wales. Professor Green became a supporter of CALM in the wake of his own father's suicide, an experience he talks about in the programme.

The film also features the story of Hector Stringer. To everyone around him, Hector was a gifted musician with everything to live for. But like many young men, he found it hard to open up about things that were troubling him. Aged just 18, he took his own life. His family and best friend Mario talk about the terrible impact it has had on them. They believe CALM's helpline, webchat service, website and magazine provide a crucial service in preventing similar needless deaths.

To find out more about Calm please go to: www.thecalmzone.net

I was 24 when my dad, Peter Manderson, took his own life. We had a troubled relationship and hadn’t spoken to each other for about six years; for no real reason we just stopped. Then one day I got in touch to try and repair some of the damage. It was Boxing Day and we argued over the phone about where to meet. I got angry, and my dad, who was a gentle man, stammered and stuttered. The last words I said to him were: “If I ever see you again I’m going to knock you out.” It all seems so desperately trivial now.

I kept wondering why no one had seen it coming? I still find it quite hard to articulate how I felt. It’s been 6 years since it happened and the weird thing about grieving is it never stops. There has to be something we can do to make a change. And I’m going to be asking you for your help.

Communication can be a big problem between men. We don’t like to talk about our problems; we think it makes us look weak, we think we can sort it out ourselves.

I still don’t know what was going through my Dad’s head when he killed himself and I never got a chance to say a proper goodbye or tell him that I loved him. I wish there could have been someone he felt he could have reached out to or confided in. That’s why I’m part of a campaign called CALM. The Campaign Against Living Miserably. An important charity which works hard to prevent male suicide.

Society likes to tell you that you have to be happy all the time, which makes it easy to think that if you’re not then there’s something wrong with you. But happiness isn’t something you can feel all the time – and here’s the key - neither is sadness. I just wish my dad knew that. I wish he’d known there was someone he could talk to.

The Campaign Against Living Miserably, or CALM, is dedicated to preventing male suicide, currently the single biggest killer of men aged 20 – 45 in England and Wales.  Every year in the UK over 4,500 men take their own lives. That’s one suicide every 2 hours. In 2013, men accounted for 78% of all recorded suicides in England and Wales, with numbers hitting a 15-year high.

CALM provides a free, confidential and anonymous helpline and web chat service for men who are down and need to talk, taking around 4,000 calls a month.  They host a website where men can read personal stories of others going through similar experiences, and find out where to get help.

CALM is unique in it’s approach to reaching a male audience, using men’s voices, peers and words to inspire them to seek help. CALM encourages men to redefine what it means to be a man, and in doing so, empowers them to talk about their problems without feeling ‘less of a man’ for doing so.

CALM produce an award winning, unique magazine for men aged 18-35, an entertaining ‘lifestyle’ title which tackles ‘mental health’ issues in a way that is fresh and accessible.  CALM also provides support and resources for those affected by suicide, through their online Bereavement Support forum, and work with other suicide prevention and bereavement organisations to improve both services for the bereaved and better suicide prevention plans.

CALM believe that suicide is preventable, and with your help will continue to provide crucial support to tens of thousands of men each year who are down or in crisis. Every £6 raised by the BBC Lifeline Appeal will fund a potentially lifesaving call to the CALM helpline and help them reach more men with their message that being silent isn’t being strong.

To everyone around him, Hector Stringer, aged 18, seemed like the heart and soul, he was an excellent guitarist in a band called Little Wolf.

Belinda said, ‘Hector was absolutely full of life, he was just one of those people that people wanted to be around him because he was just good fun.’

Robert said, ‘Hector was this special shiny soul, we all loved him to bits.’

But like many men, he found it hard to open up about things that were troubling him. On 19th April 2011, Hector phoned his mum Belinda asking if she could pick him up after a night out. They returned home and after saying goodnight, Belinda went to bed. The next morning, she found he had killed himself.

Lotte said, ‘She just screamed and it was the most harrowing thing I have ever heard. It was animalistic and it ripped through everything.’

The pain of a suicide ripples out to consume everyone around that person, leaving a huge hole in the lives of family and friends.

Mario said, ‘The kind of you know blank spaces that people leave when they decide to take their own lives. There’s, there’s no other person in the world that’s able to, fill that hole that specific hole.’

Lotte said, ‘You have to live with them not being there anymore and that was something that was, very difficult to understand and to get your head around.’

They have set up their own charity called Hector’s House which sends all funds to CALM so other families do not have to go through what they have done. They hope CALM can prevent male suicide in the future with their website, magazine and anonymous confidential helpline run by a specialist team.

To find out more about Hector’s House, click here.

Depression can affect anyone at any time, as stand-up comedian Jake Mills discovered last year.

Jake said, ‘I think you always present, your best face to the world. I think that’s what human nature is to do. When I was going through the depression I couldn’t share my feelings and thoughts with anyone because I’d already convinced myself that I was of no use to anyone and in a split second I just decided that I’d just kill myself.’

Jake attempted to end his life.

Jake said, ‘The scariest position I’ve ever been in was when I was found and saved. Everything you’ve been embarrassed to share, to talk about, everything, it’s here now.’

Jake survived his suicide attempt but he still had to deal with the feelings that had driven him to it. Fortunately, his doctor told him about the CALM website, which is there for any guy who hits a wall. It’s a space where they can find an accessible way to get help.

Jake said, ‘They presented issues that people are going through in an informal way, and that’s what’s so good about CALM, is that they start bringing people together and sharing experiences and sharing stories about people who have felt the same way that you’re feeling.’

The staff at CALM encouraged Jake to write about his experiences and share them on the site.

Jake said, ‘They were there to put an arm around me and to pick me up and to say we will help you. You’re going to be okay. And I can’t ever thank them enough for that because it gave me my heart back and it gave me a real sense of purpose.’

But just as important, CALM is tackling the stigma that prevents the four and a half thousand men who take their lives each year, from seeking help when they need it most.