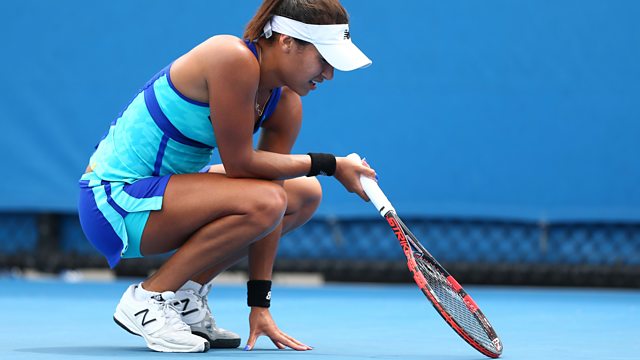 Menstruation, Mars and mathematics. Jane is joined by one of the women longlisted to start a colony on Mars, and the programme discusses the knock-on effect of periods.

Tennis player Heather Watson recently blamed 'girl things' for her disappointing performance at the Australian Open. We examine the knock on effect of periods and ask how open we are able to be about menstruation.
Jane is joined in the studio by one of the women longlisted to start a colony on Mars, astrophysics student Maggie Lieu.
As her 1974 novel Fathers Come First is reissued, Rosita Sweetman joins Jane to talk about how much things have changed for girls and women in Ireland over the last fifty years. We also hear from girl's football clubs in Kenya and hear the story behind the play Taken At Midnight about the campaign by the mother of German lawyer Hans Litten who was incarcerated for challenging Hitler.

Should we brief juries involved in sex cases?

Does it damage women if they say that periods are a reason for poor performance? Recently tennis player Heather Watson said that ’girl things’ were a factor in her crashing out of the Australian Open. Former tennis player Annabel Croft called periods 'the last taboo' and current UK Number 5, Tara Moore described having nightmares about getting her period before a major match. Why do many of us still feel so uncomfortable talking about periods that we use euphemisms to describe  them?  On the other hand if we talk too honestly about the effects our monthly cycle has on our professional and personal performance, are we doing ourselves a disservice?

Taken At Midnight is a debut play that opens tonight in London. It tells the story of Irmgard Litten who fought relentlessly for five years to free her son Hans Litten. A German Jewish lawyer, he had called Hitler as a witness in a trial in 1931 and was then among the first of the fuehrer's political opponents to be rounded up after the Nazis assumed power. Jane is joined by Patricia Litten, Irmgard’s granddaughter and Hans’ niece.

Mars One is hoping to establish a permanent human settlement on Mars with crews of four departing every two years, starting in 2024. Maggie Lieu is hoping to be among them. It requires the ultimate strength of character and bravery along with a passion for scientific discovery.  Maggie Lieu speaks to Jane Garvey about her reasons for wanting to live on Mars, the training involved and the risks she’ll face.

Comic Relief and girls’ football and mentoring in Kenya

To date, Comic Relief has raised over £960 million and since the last Red Nose Day alone, the money raised has helped over 12 million people living unimaginably tough lives in the poorest communities all over the world. One of the projects it funds in Kenya is KYFA – the Kisumu Youth Football Association. KYFA uses football as a means to bring vulnerable girls together to improve their confidence and to motivate them to stay in school. Our reporter Angela Robson went to meet some of the girls taking part in the project at Kindu School in Kisumu.  Red Nose Day is back on Friday 13th March, find out how to get involved at www.bbc.co.uk/rednoseday

Rosita Sweetman’s coming of age novel, Fathers Come First, was first published in 1974.  The novel captures brilliantly the mixed-up youthful confusions of a young woman, Elizabeth, in Dublin in the late 60s, recently let loose from a strict Catholic boarding school convent.  Rosita, like Elizabeth, was educated in a Catholic convent, but unlike Elizabeth,  she went on to become a campaigner and one of the founders of the Irish Women’s Liberation Movement. She joins Jane to talk about her recently reissued novel and how much things have changed for girls and women in Ireland over the last fifty years.