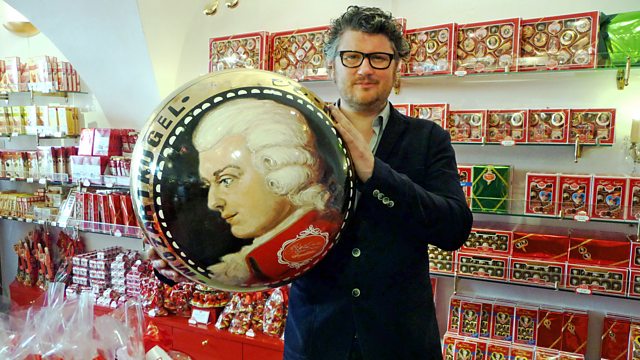 The Joy of Mozart

Tom Service heads from London to Vienna and Salzburg to unpick the living, breathing genius that was Mozart. With Sir John Eliot Gardiner, Nicola Benedetti, Paul Morley and others.

Tom Service plunges into the life and times of Mozart to try and rediscover the greatness and humanity of the living man in his moment. Mozart's prodigious output and untimely death have helped place him on a pedestal that can often blind us to the unique brilliance of his work in the context of his life and times. Tackling the sentimental tourist industry of Salzburg and the cloying reverence in which Mozart is too often held, Service visits the key cities and rooms in which Mozart lived and worked, plays some of Mozart's original instruments and scores, and gradually uncovers the brilliance and originality of his work as the 18th century turns into the early 19th.

There is the prodigious childhood when Mozart was feted as an infant phenomenon around Europe's most glittering courts, and his golden decade in Vienna in which masterpiece followed masterpiece - operas, symphonies, piano concertos, string quartets - as if this short, high-voiced man-child must have been taking dictation from some divine source, until his death at the age of just 35 in 1791.

Even more than the music, Mozart's tragic demise sets the seal on his myth. The trajectory of Mozart's life sets the template for the romantic paradigm whose throes we are still in today, which requires our creative heroes to die young to prove that they were too good for this madding world, whether it be Wolfgang Amadeus or Jimi Hendrix.

Service travels from London to Vienna and Salzberg, unpicking the living, breathing genius that was Mozart. With Sir John Eliot Gardiner, Nicola Benedetti, Paul Morley and others.

See all clips from The Joy of Mozart (3)

Tom Service has presented Music Matters on Radio 3 since 2003; also for Radio 3, he regularly presents the new music show Hear and Now, the Proms, and documentaries.

In 2013 he hosted a 6-part series of 20th Century Classics at the Proms for BBC Four television and in 2014, Masterworks at the Proms. He presented the award-winning documentary Handel’s Messiah at The Foundling Hospital with Amanda Vickery on BBC Two in Easter 2014.

Tom writes about music for The Guardian, where he was Chief Classical Music Critic. His books Music as Alchemy: Journeys with Great Conductors and their Orchestras and Full of Noises, interviews with the composer Thomas Adès, are published by Faber.

He was Guest Artistic Director of the Huddersfield Contemporary Music Festival in 2005. His PhD, at the University of Southampton, was on the music of John Zorn.

See all galleries from The Joy of Mozart (2)