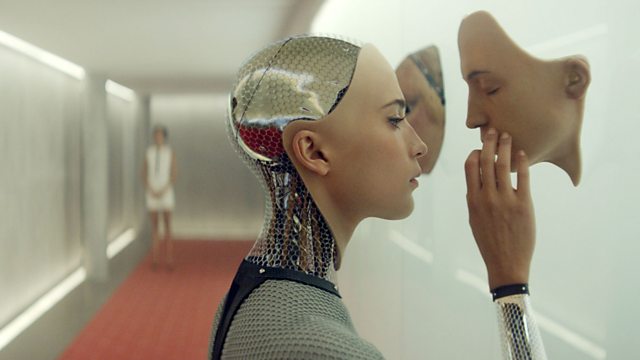 Ex Machina is the new film written and directed by Alex Garland, writer of The Beach and 28 Days Later, about the quest for the perfect AI robot. Briony Hanson, Director of Film at the British Council, reviews the film that stars Alicia Vikander, Domhnall Gleeson and Oscar Isaac.

Samira Ahmed talks to theatre director Jamie Lloyd, well-known for re-imagining great plays and finding in them contemporary relevance. His latest production is The Ruling Class, Peter Barnes's 1968 satire of those in power and how they get away with murder, starring James McAvoy as the 14th Earl of Gurney, who thinks he is the Messiah.

Max Brooks discusses his new book The Harlem Hellfighters, a graphic novel which focuses on the real-life 369th Infantry Regiment in the First World War, composed entirely of African American soldiers who despite achieving enormous success in war faced tremendous discrimination on their return from Europe in 1919.

The Ruling Class, directed by Jamie Lloyd, is on until 11 April 2015 at Trafalgar Studios

Ex Machina is in cinemas nationwide from 21 January, certificate 15

Emma Healey’s novel Elizabeth is Missing, winner of the Costa first novel award, is out now.

The Harlem Hellfighters by Max Brooks out in paperback on 29 January, published by Duckworth