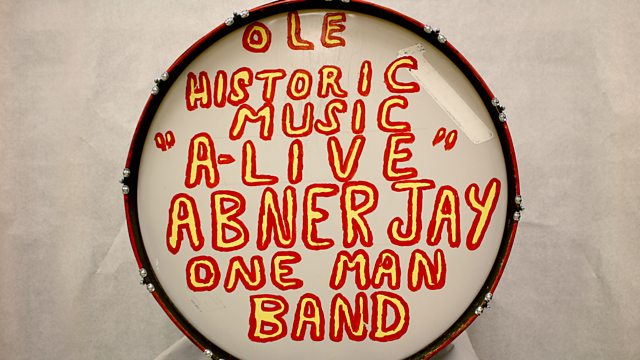 The True Story of Abner Jay

Laura Barton pieces together the true story of Abner Jay: one-man band, songster, off-colour raconteur and a direct line to a different era.

Laura Barton pieces together the true story of Abner Jay, a most unusual musical talent.

Abner Jay was an itinerant musician - a modern-day minstrel. He was a one-man band, a songster, a storehouse of history and an off-colour raconteur; he was a direct line to a different era.

He said that his instruments were centuries old, passed down through his family. That his father and grandfather had been slaves. He claimed to have fathered 16 children, that daily doses of water from the Suwannee River kept him young and that he was 25 years younger than you think.

But you never know what to believe with Abner Jay.

What is certainly true is that he travelled the Southern states of the US with a converted mobile home which he opened out into a makeshift stage. And he was possibly the last performer of the 'bones' - a musical tradition that involved playing rhythms on cow and chicken bones dried in the sun.

The writer Laura Barton talks to those who knew him and those who love his music in an effort to dig beneath the myth and misdirection and reveal the true story of Abner Jay.

See all clips from The True Story of Abner Jay (6)