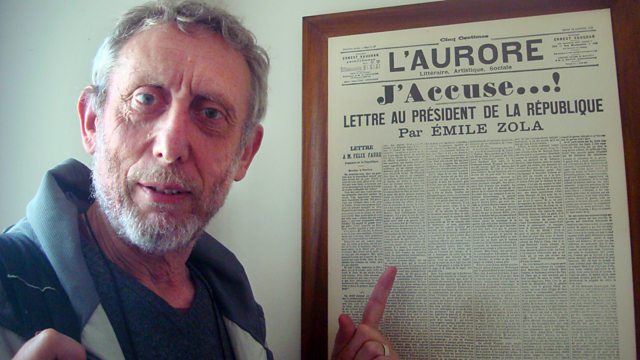 Michael Rosen explores the political, literary and personal tensions in Zola's life during his 11-month exile in Britain as he fled a prison sentence in France.

In July 1898, one of France's most famous novelists Emile Zola was sentenced to a 3000 francs fine and a year's imprisonment for libelling the military court in his famous public letter 'J'Accuse', written in defence of Alfred Dreyfus. Rather than serve the sentence, this international star fled to the unlikely refuge of suburban south London. There he stayed in hotels and lodgings being minded by his long-suffering translator, Ernest Vizetelly. Michael Rosen explores the political, literary, and personal tensions and overlaps in Zola's life during his eleven month exile.

At the outset Zola and his friends were very concerned that he could be extradited but even when it became clear that he wouldn't be, he kept a low profile - unlike the time he came to London five years earlier when he was feted by thousands. During his stay, he wrote a novel ('Fécondité' - 'Fruitfulness'), a ghost story, many letters and a memoir, between going on regular cycling trips and taking hundreds of photos of the new suburbs in Surrey and Crystal Palace. He observed the English and lamented his isolation. Thanks to his wife Alexandrine's self-sacrifice, first his lover Jeanne and their children came to see him, followed by Alexandrine later.

Michael Rosen follows in Zola's footsteps from the Gare du Nord, Paris to London, Victoria and to Zola's places of stay. He discovers contrasting views of Zola in the Press and examines Zola's literary trajectory at the end of his life. Anton Lesser and Harriet Walter are the voices of Emile and Alexandrine Zola.

Many of the photographs taken by Emile Zola when he was in England and on view in our online gallery, can be seen in 'Emile Zola: Photographer in Norwood South London 1898-1899', published by The Norwood Society.

The music used in the programme is ‘Rambouillet: Nuptial’ taken from Promenades (1893) by Albéric Magnard and played by Stephanie McCallum.