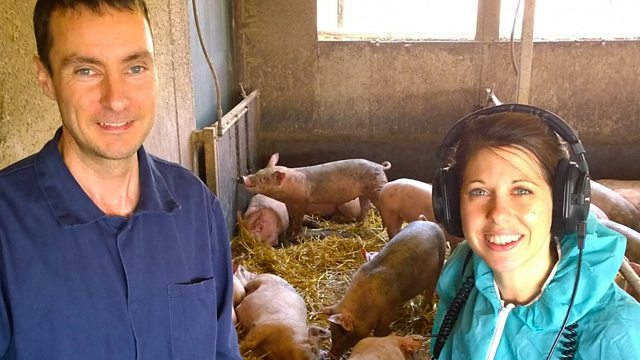 Anna Jones meets the scientists looking into the relationship between farmyard behaviour and farm productivity.

How important is it to understand the behaviour of farm animals? Psychologically, are pigs, sheep and cows particularly complex? Anna Jones travels to the research headquarters of Scotland's Rural College (SRUC) in Edinburgh where scientists are looking at the relationship between farmyard behaviour, and farm productivity.

Dr Simon Turner is studying aggressiveness in pigs to try and understand why some continually pick fights - irrespective of whether they win or lose. He explains how controlled 'contests' are allowing them to gather essential data which could help the pig industry tackle a long-standing welfare problem.
Anna also looks at research aimed at finding out if defensive newly-calved beef cows make better mothers. It's a dangerous character trait, posing a serious safety risk to those handling cattle, and initial findings suggest defensiveness has no commercial benefit.

And sheep - how do their minds work? SRUC researcher Kenny Rutherford is examining the effect of pre-natal stress in ewes on their offspring, and challenges the commonly held belief that sheep are stupid.

You will never look at farm animals in the same way again.

Produced and presented by Anna Jones.