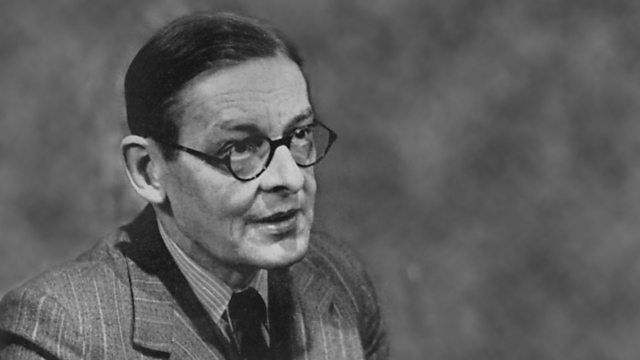 A special edition of music and poetry read by Simon Russell Beale to mark the 50th anniversary of T.S. Eliot's death with poems including Four Quartets, The Waste Land, Marina and Landscapes and music by Thomas Ades, Beethoven, Stravinsky and Chopin.

This week’s Words and Music is a special edition which marks the 50th anniversary of the death of T.S. Eliot with words by the poet and music which he admired and was inspired by and work inspired in turn by him.

Beethoven was perhaps the composer best loved by Eliot. In 1931 he wrote to Stephen Spender: ‘I have the A Minor Quartet on the gramophone, and I find it quite inexhaustible to study. There is a sort of heavenly, or at least more than human gaiety about some of his later things which one imagines might come to oneself as the fruit of reconciliation and relief after immense suffering; I should like to get something of that into verse before I die.’ The late Quartet in A Minor op 132 was even said by Eliot to have been the inspiration behind his masterpiece, ‘Four Quartets’. Here you’ll hear it alongside Simon Russell Beale reading from ‘Burnt Norton’. That’s followed by the Russian composer Sofia Gubaidulina’s ‘Hommage a T.S. Eliot’ written after she had read ‘Four Quartets’ and found herself responding to the spiritual elements expressed in the poem.

T.S. Eliot himself reads from ‘The Love Song of J. Alfred Prufrock’, published in 1917 and seen as marking a huge cultural shift from the pre-war period towards modernism. Its many references to Hamlet are echoed in Roger Quilter’s ‘How should I your true love know?’ sung beautifully by Jonathan Lemalu with piano accompaniment by Malcolm Martineau. Shakespeare too was the inspiration for Eliot’s ‘Marina’, which retells the story of Pericles’ long-lost daughter. There are also echoes of ‘The Tempest’ and the poem is heard with the ‘Intermezzo’ from Sibelius’ ‘Tempest Suite’ and Frank Martin’s ‘Full Fathom Five’.

In the 1930s T.S. Eliot published his ‘Old Possum’s Book of Practical Cats’, poems written for his godchildren. You’ll hear Simon read ‘Gus, the theatre cat’ which must have been inspired in part by the poet’s love of the theatre.  In his early years he was a huge fan of music hall and a great admirer of Marie Lloyd. The Old Possum poems were, of course, the inspiration for one of Andrew Lloyd Webber’s most successful musical, ‘Cats’, which has just been revived in London.

In 1957 Eliot married his second wife, Valerie. It was a very happy marriage and Simon reads ‘A Dedication to my Wife’ which shows a very unexpected side to the poet. It’s followed by ‘On the street where you live’ from the musical, ‘My Fair Lady’, a show much enjoyed by Eliot : he’s said to have liked it far more than ‘Pygmalion’.

Max Richter’s one act ballet ‘Infra’ was inspired by ‘The Waste Land’ and is heard with a section from ‘The Fire Sermon’ read by Simon and Paul Scofield.

A chorus from ‘The Rock’ is followed by the American composer Vincent Persichetti’s ‘ The Hollow Men’, based on Eliot’s 1944 poem.’

The programme ends with ‘Little Gidding’, the final part of Eliot’s ‘Four Quartets’. The lyrics in Stravinsky’s ‘The Dove Descending’ are from the fourth section of the poem. Stravinsky was the only internationally renowned composer to set Eliot’s words to music during the poet’s lifetime and the work was performed at Eliot’s memorial service in February 1965 at Westminster Abbey.  The two had met in 1956 at the Savoy Hotel in London where they talked about dance and Tristan and Isolde.

Simon’s reading of the end of ‘Four Quartets’ is followed by Thomas Ades’ ‘…..but all shall be well’, inspired by the poem and Eliot’s hard won optimism expressed in his final words that:

‘..all shall be well and

All manner of things shall be well

When the tongues of flame are in-folded

Into  the crowned knot of fire

And the fire and the rose are one.’