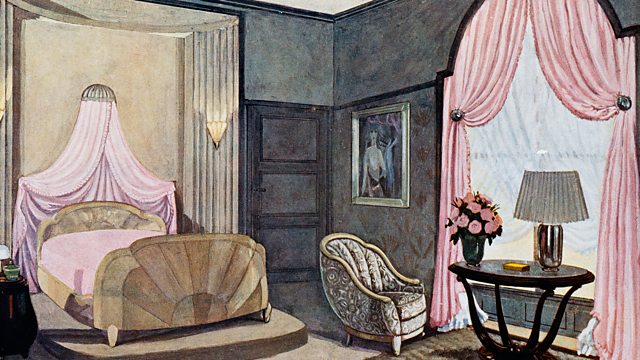 Poetry, prose and music on the theme of rooms - from ballrooms to bedrooms, from Beethoven to the Beach Boys and from Dylan Thomas to Roald Dahl and the voices of Amanda Root and Nicholas Farrell.

Most of us spend most of our lives in enclosed rooms of one sort or another. If they weren’t there we would create them, as nomads do with tents or children do with dens.  Of course we need them for protection and warmth but they also have dedicated functions in our lives – special places to do special things.

The hall is usually the first room we come to in a building and so is often designed to impress. The Hall of the Mountain King, given musical form in Grieg’s suite for Peer Gynt, must have inspired awe in the eponymous protagonist of Ibsen’s play who dreams of visiting the troll king.  Michael William Balfe gives us a different take on fantasising about the grandeur of imposing buildings with the poignant and aspirational air I Dreamt I Dwelt in Marble Halls from The Bohemian Girl.

Snuggling between them, John Donne addresses the day from a more intimate room; the bedroom shared with a lover, and compares the world inside the walls with the one without.

In her 1928 lectures at the Cambridge women's colleges, Girton and Newnham, Virginia Woolf sees ‘a room of her own’ as a prerequisite for a woman to be able to write fiction and the idea of the room as an emblem of self-determination becomes a feminist cultural marker. That rooms can be seen as social symbols is explored by Sylvia Townsend Warner who views the transformation of a culture and an era exemplified in the rooms of stately homes, their furnishings and contents.

The Duke Ellington Orchestra’s reiteration of the popular standard Rose Room recalls another changing society, the fleeting ‘jazz age’. This tune would have provided a soundtrack for the silent movie stars dancing in that very room at the St Francis Hotel in San Francisco, and was surely played by the house band led by the songwriter, Al Hickman.

Hickman must have considered the acoustics of the room when he composed the melody in 1917. Eighty years earlier Hector Berlioz too had a specific room in the mind when, to commemorate the dead of the 1830 Revolution, he wrote his Requiem, or Messe des Morts. It was the chapel of Les Invalides in Paris where the work was first performed with more than 400 musicians exploiting to full effect the sound of the room in an invocation of Judgment Day. This version, with Leonard Bernstein conducting, was recorded at the same venue in 1975.

In childhood, rooms are our world within a world - none more so than the one Anne Frank and her group lived in during the Nazi occupation of Amsterdam. Andrew Motion’s poem visits the concealed annexe where she hid in fear for two years. But teenage rooms are often places not of enforced but voluntary retreat.  Brian Wilson of the Beach Boys wrote In My Room and said "I had a room, and I thought of it as my kingdom. And I wrote that song, very definitely, that you're not afraid when you're in your room.” In it he taught his brothers to sing harmony.

Nowadays childhood rooms are likely to be dominated by electronic equipment which, in Roald Dahl’s day, meant the television - something he didn’t approve of at all. It would have been interesting to see what he would have written about computer games. For Edward Elgar dolls embody the notion of childhood play and his Nursery Suite contains three movements about dolls as well as awakening and dreaming sections expressing the happiness of a child’s room.

Nevertheless rooms can seem like prisons to children longing to go out and play although in DH Lawrence’s poem Last Lesson of the Afternoon it is the teacher who can’t wait to escape the classroom.

Illness can confine us to our rooms too. Beethoven was recovering from a serious intestinal complaint in 1825 and it was while he was on a Spartan diet and still coughing up blood that he composed his string quartet Op 132.  The dry scratchiness of the third movement speaks of sickness. Eventually he did recover as the other movements attest. It is more difficult to gauge the attitude to her childhood sickroom of the American poet Louise Glück, anorexic as an adolescent. She seems to find a strange comfort in lying ill in bed.

Aaron Copland’s 1930s composition El Salón México is subtitled ‘A Popular Type Dance Hall in Mexico City’ and conjures up the Latin flavours of the room, in the same vein but with a completely different approach from Hickman’s musical depiction of the Rose Room.

It is Italian flavours that Elizabeth David wanted to conjure up for the British palate of the early fifties, innocent of Mediterranean food. She aimed to introduce us to the Italian kitchen. In Italy and France the name of the room, cucina or cuisine, is a metonym for not just the activity that takes place there but a whole gastronomic way of life. Leonard Bernstein tries the same thing musically with his setting of four recipes by Emile Dumont, a sort of nineteenth century Raymond Blanc, who published La Bonne Cuisine Française, a manual for the ‘mistress of the house’.

The idea of sharing rooms is something we are always ambivalent about – they are enclosures in a physical sense but also in a mental or emotional way and to let others in is either an invasion or a sharing of privacy, depending on your point of view. Philip Larkin displays his distaste for the legacy of Mr Bleaney, the previous occupant of his lonely room and, already in the 1950s, seems to be with Roald Dahl on televisions.  Dylan Thomas leaves us to guess whether the stranger in his room is literally there or whether something else is occupying the inner room of the mind.

The Rothko Chapel was created by the painter Mark Rothko in 1971 as a ‘spiritual environment’, an octagonal room in which to share contemplation.  Morton Feldman’s piece of the same name was written to be performed in the room the year after it opened. He wrote that he wanted the sound to permeate the room in the same way that Rothko’s paint went right to the edge of the canvas. “The sound is closer, more physically with you than in a concert hall.”

The same might be said of Haydn’s Piano Trios. Haydn was a founding father of classical chamber music where the drier acoustic of a smaller room enabled faster, more complicated, conversational playing than a more reverberant auditorium would allow. You can get an idea of how it might have sounded in a palace chamber on this recording of Trio No 39 in G Major which uses a fortepiano from the 1790s, for which Haydn wrote, the forerunner of the modern grand piano.

Apart from the church, the music chamber and the concert hall another room where music was heard historically was the ballroom. The importance of finding the right one is illustrated in the extract from Jane Austen’s Emma. The ballroom at the Crown was clearly a little more than a room above a pub but whether it would have been big enough for waltzing is unclear. Emma was published in 1815 around about the time the modern waltz made its first appearance in Britain but it might well have been too racy for Emma Woodhouse and her friends. However by the time Johann Strauss II wrote the Wine Women and Song Waltz in 1869 it had become the height of fashion and was to be a staple of the style known as ‘ballroom’ dancing - another example of the room defining the activity – to the point that two hundred years later it is essential to popular Saturday evening television on Strictly Come Dancing. One wonders what Dahl and Larkin would have made of that.