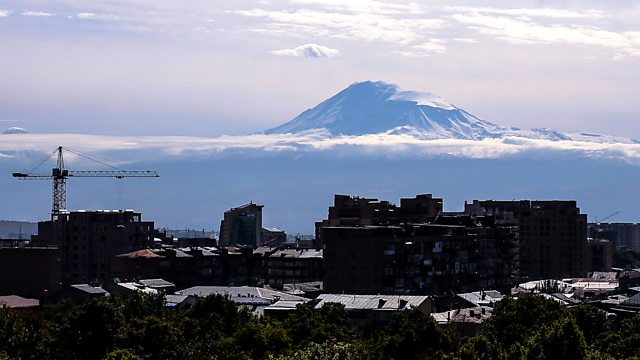 Out of Armenia
Episode 1 of 5

From Manchester, home to Britain's oldest Armenian community, Charles travels to Paris, the largest and most dynamic Armenian diaspora community in Europe, still living in the shadow of the memory of the massacres and deportations of Armenians in the Ottoman Empire in 1915.

In Venice, he meets the monks charged with the safe-keeping of Armenian traditions of literature and song on the island of San Lazzaro. In Istanbul, we hear the more recent stories of the city's Armenian community - subtle architects building a new relationship between Turks and Armenians from the foundations up.

Finally, at the foot of Mount Ararat, in Yerevan, underground jazz music and Syrian refugees tell a new story - of a new focus for Armenian identity and fresh challenges to its survival.

Armenians have long lived in diaspora, struggling to keep their common identity alive in communities dispersed around the world. They became leading figures in Ottoman Istanbul. In the 19th century, some moved to the dirt and damp of the booming textile city of Manchester, establishing themselves in the city's middle-class suburbs and building the first Armenian church in north-west Europe.

Over tea and cake in warm family homes, Charles hears the stories of a tiny but close-knit community, now concerned about how to keep alive its identity, language and religion for a new generation of Mancunian Armenians. The church holds services just once a month, when a priest comes up from London. Some ask whether there will be an Armenian community in Manchester at all in 50 years' time.

Produced by Cicely Fell
An Above The Title production for BBC Radio 4.

See all episodes from Out of Armenia