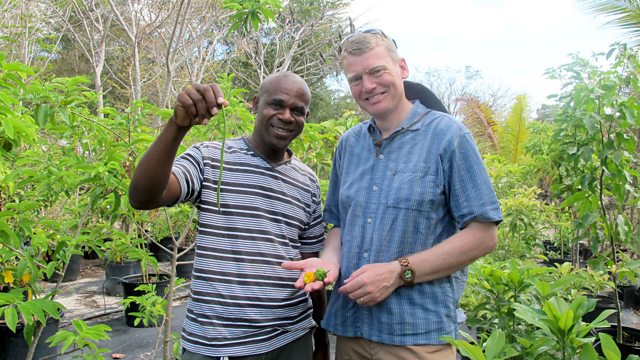 Tom Heap samples the mouth-puckering taste of paradise as he visits the Turks and Caicos Islands to meet a farmer specialising in scotch bonnet peppers.

Tom Heap samples the mouth-puckering Taste of Paradise as he visits the Caribbean to meet a farmer specialising in Scotch Bonnet Peppers.

Well over 90% of the food consumed in the Turks and Caicos islands is imported from abroad. In the course of a generation a nation of subsistence farmers and fishermen have given up the land and the sea to work in the booming tourist industry. But Courtney Missick is an exception. He comes from a long line of local farmers and is absolutely determined to make his small farm on the island of North Caicos a commercial success. Growing coconut trees for resort hotels and Scotch Bonnet Peppers for a local hot sauce bottler, he's showing that the thin, dry soils of the islands can produce a healthy harvest.

Courtney takes Tom for a tour of his farm, showing how his ducks and chickens fertilise the soil and explaining how he's picked up innovative irrigation techniques from the US and Israel. He's joined by his neighbour, naturalist and amateur farmer Bryan Naqqi Manco who fills in the history of the islands, from the pre-Columbian native farmers, through the brief period of cotton plantations to the time when the freed slaves learnt how to cultivate for themselves. Courtney is determined to do justice to their legacy and make the Turks and Caicos Islands self-sufficient once more.