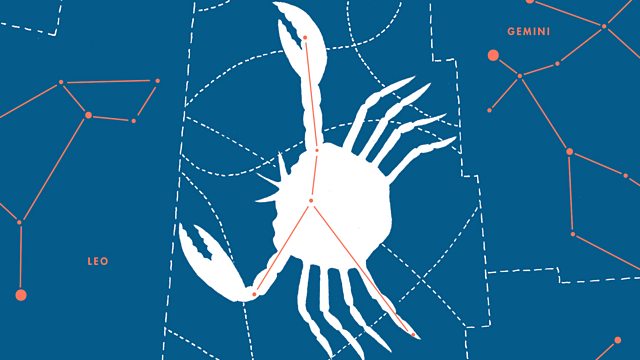 4 Extra Debut. Susanna Hislop reveals the origins of names of the night sky's constellations: Corvus, the Crow and Cancer, the Crab. From December 2014.

A seasonal reading for clear and frosty nights, when the skies sparkle with thousands of dots forming half remembered, almost traceable shapes. These are the stories behind the names and shapes of the constellations that pattern the night sky.

Stories In The Stars by Susanna Hislop is read by a range of voices and accents from around the country and the globe. It might be one of the stories that the great Egyptian astronomer Ptolemy assigned to them in his masterwork that became known as the Almagest, or it might be a personified first person narration from the constellation Chameleon having a grumble about the number of different names and imagined shapes assigned to him over the millennia.

From Greco-Roman mythology to the lives of the eighteenth century astronomers, this is a delightful miscellany which gives us a reason to step outside, look up and wonder at the magic lantern show above us.

Episode One:
Susanna Hislop introduces us to the cartographers who first mapped the night sky. Corvus, the Crow and Cancer, the Crab offer different perspectives.

Episode 2—Stories in the Stars