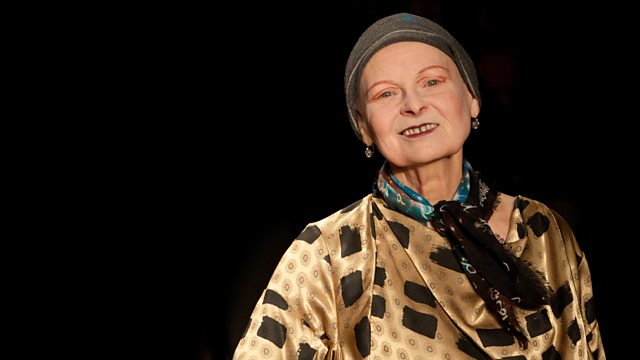 Dame Vivienne Westwood needs little introduction; her name and her brand are known across the world. Indeed, in the Far East she's made it into the top ten most recognised global brands, with Coca Cola and Disney. Her fame rests not just on her fashion designs, daring and sexy and original as they are: because Vivienne Westwood is also the co-creator, with Malcolm McLaren, of punk - that revolution of music and fashion that changed Britain back in the mid-70s.

What is less well known is her passion for classical music, and for going to concerts - 'it's brilliant, it's only £10, much cheaper than going out to a discotheque'. In Private Passions, she talks to Michael Berkeley about the music which has inspired her creations, and about creating costumes for the opera. She describes the hardship of her early days as a designer, when she was so short of money that she lived in a caravan with her two small sons. She remembers the heady days of punk, and marching up and down King's Road dressed entirely in rubber. ('Rubberwear for the office' was the concept, and it was very comfortable, she claims.) She tells the story of how she met her husband Andreas, who now designs with her, thanks to a cow. And why there is nothing more attractive than a man in a suit. Especially when he's bending over.