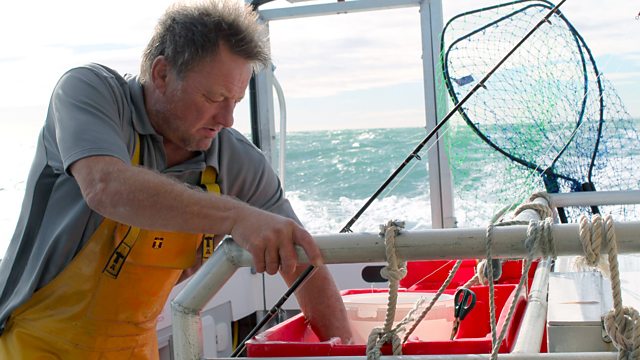 Over the centuries the 29,000 square miles of the English Channel have provided an abundance of fish such as cod, haddock and skate. But in recent decades their numbers have plummeted - in part due to industrial-scale fishing methods. A band of eco-fishermen from Weymouth are hoping to help preserve the channel's fish stocks by using the more traditional fishing method of a rod and line to catch sea bass. But it's a volatile and unpredictable way to earn a living, and they can come home with nothing.

The team from the UK's Border Agency working in Southampton also uses a hands-on approach to intercept contraband and illegal cargo coming into the port, with sniffer dogs playing an important role alongside more hi-tech detection methods. But with £524 billion worth of goods coming through UK ports each year in millions of containers, it can be like looking for a needle in a haystack.

And it's a busy day too for the crew of the Whitonia tanker, whose job it is to refuel the massive cruise liners and cargo ships that come in and out of the port every day.

See all episodes from Channel Patrol