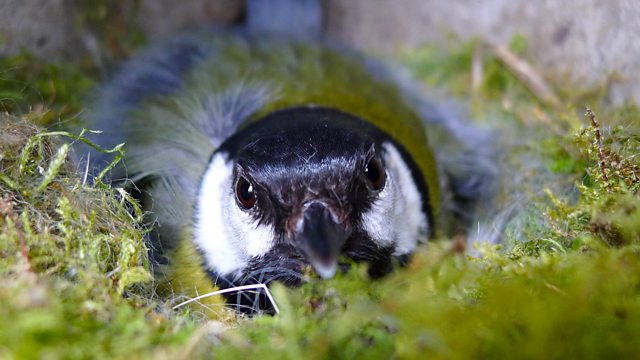 Prof Adam Hart explores a new field in zoology - animal personality. What can we learn about human personality from research on temperament in sharks, great tits, crabs and apes?

Professor Adam Hart explores the newest area in the science of animal behaviour - the study of personality variation within species as diverse as chimpanzees, wandering albatrosses, sharks and sea anemones. What can this fresh field of zoology tells us about the variety of personality among humans?

We are all familiar with the variety of temperament and character in the dog, Canis lupus familiaris, but this is the product of selective breeding by humans over generations.

A more surprising revelation is that up and down the animal kingdom, Nature favours a mix of personality types within a species. Oxford ornithologists working in nearby Wytham Woods have discovered that in a small bird species such as the Great tit, both bold and shy individuals prosper in different ways. The same applies to hermit crabs and sea anemones in the rock pools along the South Devon coast. In these creatures, scientists see a stripped down equivalent of the Extraversion-Introversion dimension of human personality. In sharks, researchers have discovered that there are sociable individuals and others who prefer their own company.

The commonest personality trait identified so far in non-human animals is Extraversion-Introversion. In primates, personality variation is more multidimensional. Psychologists have agreed on five fundamental dimensions of human personality - Extraversion, Openness, Agreeableness, Neuroticism and Conscientiousness. Among different monkey and ape species, primatologists have documented variation in 3 or more of these traits. In fact, in chimpanzees, they have discovered the Big Five plus an additional personality dimension which we humans lack, fortunately.

Adam Hart asks if how relevant the recent discoveries in animal personality research are to understanding the nature of personality in people, and whether this is an aspect of human nature which is still undergoing evolution.

Adam Hart is an evolutionary ecologist and Professor of science communication at the University of Gloucestershire.