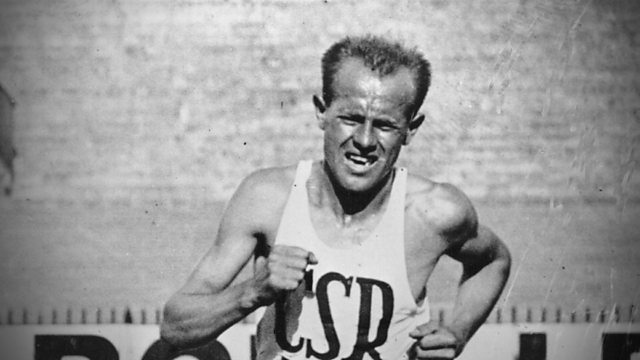 Matthew Parris – himself current holder of the House of Commons marathon record time – meets comedian Arthur Smith, who also turns out to have been a runner when he was younger, and whose choice for a Great Life is an athlete whom he has admired since his childhood.

Emil Zátopek emerged onto the international stage in 1948 when he became a sensation at the Olympics in London, but it was his performance in the 1952 Helsinki Olympics which put him in the record books. Already an established distance runner, he bagged gold in the 5000 and 10000 metres and then, having previously given no hint that he would be a champion marathon runner, he also won that race.

The expert witness is Pat Butcher, writer and ex-runner, who is working on a biography of Zátopek, and he argues that no-one is likely ever to equal Zátopek's achievement in winning gold in three different distance events.

Zátopek retired from competitive running in 1957 and later fell heavily out of favour with the post- Dubcek regime in Czechoslovakia but was rehabilitated after 1989 and remains a much-cherished hero in Czech Republic and among the running community.

Laura Bates on Louisa May Alcott—Series 35