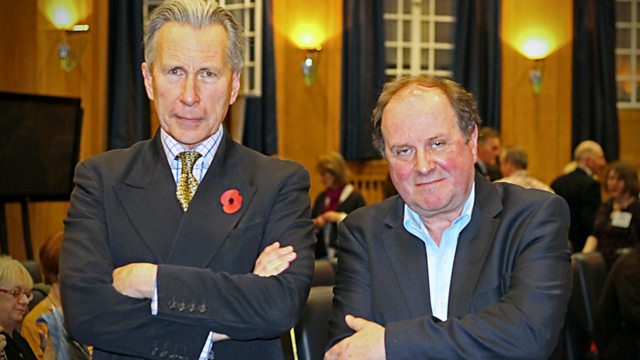 With James Naughtie. In a special 200th edition of the programme we celebrate the centenary of author Patrick O'Brian and Allan Mallinson is our guide to the first in his hugely popular series of Napoleonic naval stories, Master and Commander.

Known as the Aubrey/Maturin novels, the twenty books are regarded by many as the most engaging historical novels ever written. Master and Commander establishes the friendship between Captain Jack Aubrey and Stephen Maturin, who becomes his ship's surgeon and an intelligence agent.

O'Brian won fans not just because of the story-telling and his power of characterisation but also his detailed depiction of life aboard a Nelsonic man-of-war : the weapons, food, conversation and ambience, the landscape and the sea.

Master and Commander was first published in 1969 and the twentieth novel in the series Blue at the Mizzen, in 1999, a year before O'Brian died.

Allan Mallinson also writes novels about the Napoleonic wars and knew O'Brian. And as always on Bookclub a group of invited readers join in the discussion.

December's programme marks the 200th edition of Bookclub which began in 1998 and has featured the world's leading authors from the late 20th/early 21st century like Toni Morrison, JK Rowling, Hilary Mantel, Salman Rushdie, Martin Amis, Paul Auster, Alan Bennett. James Naughtie's impressive list of guests also includes writers who are no longer with us like Muriel Spark, Gore Vidal, Douglas Adams, Carol Shields, and Sue Townsend. All are available online to download and keep forever, via the programme's website bbc.in/r4bookclub .

Blake Morrison - And When Did You Last See Your Father?

Marina Lewycka - A Short History of Tractors in Ukrainian