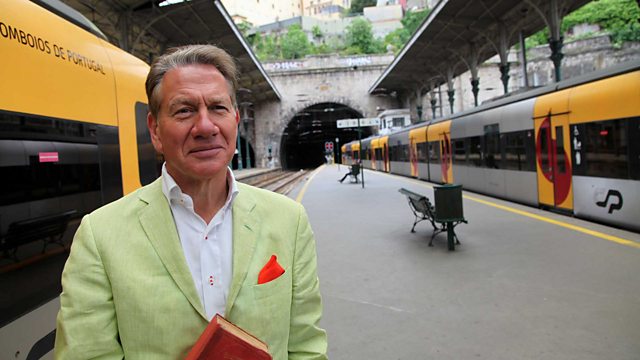 Michael Portillo retraces journeys in Spain and Portugal from the 1913 guide. He meets pilgrims from around the world on the trail to Santiago de Compostela.

Armed with his 1913 Bradshaw's, Michael Portillo explores a very different Spain from the one he knows best and ventures across its border with Britain's oldest ally, Portugal.

Beginning in Galicia, Michael discovers the elegant city of La Coruna, a fashionable destination for Edwardian Britons, for whom the principal attraction was the tomb of a British military hero. Michael uncovers the Celtic roots of the Galician people and tries to master the bagpipes but finds himself upstaged by a six-year-old.

On the pilgrims' trail to Santiago de Compostela, Michael meets walkers from all over the world heading for the cathedral, and he is led into the archive to see one of the world's first guidebooks, dating from the 12th century.

Aboard the West Galician Railway, Michael hears how a 19th-century British railwayman sought his fortune in Galicia and ended up running the company. A visit to a sardine cannery has Michael scrubbing octopus tentacles, and a taste for the cephalopod sees Michael set sail with local fishermen to see if he can trap one.

Arriving at the ornately tiled Sao Bento station in Porto, he finds out about the birth of Britain's long alliance with the Portuguese. A glass of 1953 port awaits him at the city's Factory House, before he embarks on the Linha da Douro along the spectacular Douro Valley.

At Coimbra, Michael is moved by the mournful strains of the fado sung by students of the university, then boards the high-speed train to the Portuguese capital Lisbon.

Following in the footsteps of King Edward VII, who visited his cousin King Carlos in 1903, Michael explores the city from the Santa Justa lift to the harbour at Belem. An attempt to make Portugal's national sweetmeat proves challenging, but help is at hand.

At the handsome Palace Square, Michael hears how turbulent events at the time of his guide saw the Portuguese royal family almost wiped out.