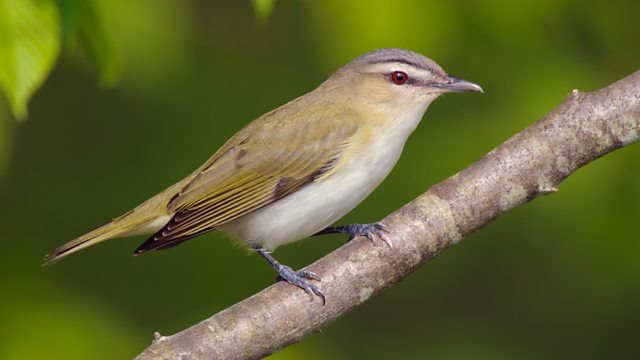 Michael Palin presents the red-eyed vireo from North America. About the size of British great tits the red-eyed vireo is a common summer visitors to much of North America where they breed in woodlands. The adult vireos are mainly olive green with white bellies and grey heads and their red eyes are highlighted by a white eyestripe. Seeing the birds as they hunt insects among the leaves is much harder than hearing them, because red-vireos are tireless songsters. They used to be known locally as "preacher birds " and territorial males hold the record for the largest repertoire produced by a songbird in a single day.

Each vireo can have a repertoire of between a dozen and over a hundred different song-types. And while these marathon "question- and- answer" sessions are the soundtrack to many North American woods, they aren't universally appreciated. The nature writer Bradford Torrey wrote in 1889 that "whoever dubbed this vireo the preacher could have had no very exalted opinion of the clergy"

This programme contains a wildtrack recording of the red-eyed vireo kindly provided by The Macaulay Library at the Cornell Lab of Ornithology; recorded by Geoffrey A Keller on 1 May 2007; in Yellowwood State Forest, Brown County, Indiana, USA.