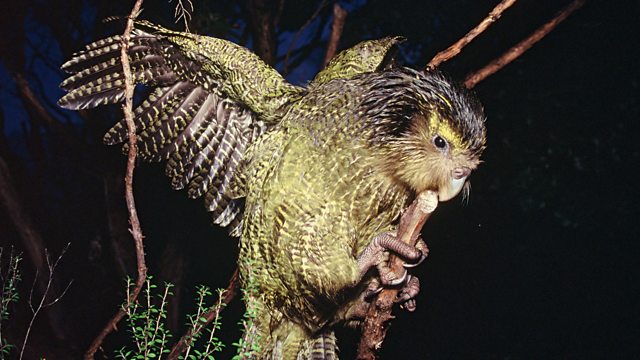 Michael Palin presents the New Zealand Kakapo, high on the ferny slopes of its island fortress off the coast of New Zealand. Kakapos are flightless and the heaviest parrots in the world. They're also called owl-parrots from their nocturnal habits and open owlish expressions. Like owls their plumage is richly mottled although no owl shares their beautiful moss-green tones.

Kakapos also have a curious mating strategy. The males gather at traditional "leks" or display areas to attract mates. At the top of a wooded ridge, the male digs one or more a bowl- like depressions in the ground which function as an amplifier. He then takes a deep breath, swells his throat-pouch like a balloon then releases the air with a soft booming call which can carry up to five kilometres.

This sound can now only be heard on a handful of offshore islands. The kakapo story is tragically familiar. Flightless and ground-nesting, it was helpless in the face of settlers who logged its forests and introduced cats and rats which slaughtered the birds. Between 1987 and 1992 the last surviving kakapos were relocated to predator-free islands. Now following intensive care and a national conservation strategy, there are about 130 kakapos in the wild.