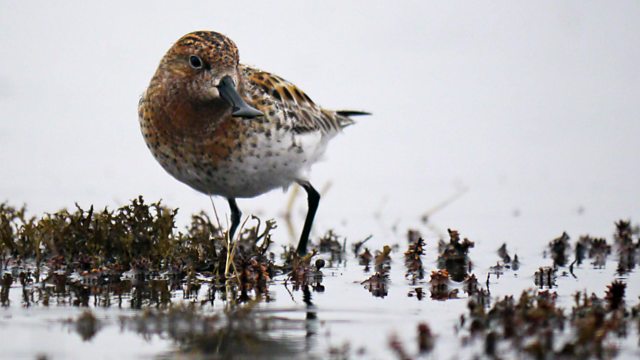 Liz Bonnin presents the diminutive spoon-billed sandpiper of the high Russian tundra. Spoon-billed sandpipers are wading birds, no bigger than a house sparrow. They have rust-coloured feathers and a black, spoon-shaped bill for sifting tiny creatures from the mud or catching insects on the tundra of eastern Russia, where they breed. In winter they fly down to south-east Asian estuaries. Here they are increasingly threatened by the reclamation of mudflats for development and by local people who trap the waders in fine nests to eat. Today, there may be fewer than a thousand birds left. Now conservationists have taken some birds into captivity to establish a breeding stock, but others are being helped on their breeding grounds by headstarting, whereby adults are encouraged to lay a second clutch of eggs after the first are removed. Its hope that this work, plus encouraging local hunters in Asia to release any sandpipers caught in nets, will secure the spoon-billed sandpiper for future generations.

The spoon-billed sandpiper conservation breeding programme is a collaboration between WWT, Birds Russia, Moscow Zoo and the RSPB working with colleagues from the BTO, BirdLife International, ArcCona and the Spoon-billed Sandpiper Task Force.

More information about WWT's involvement in the project can be found here.