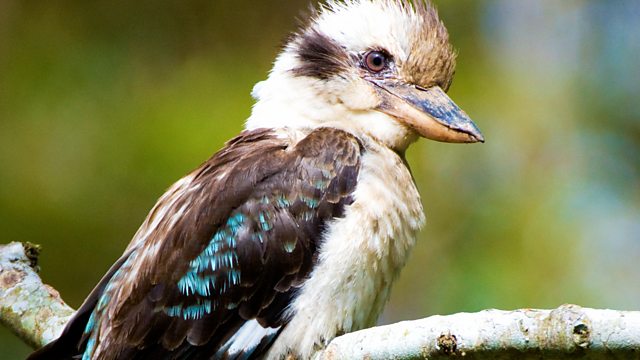 Sir David Attenborough presents Australia's laughing kookaburra. At 45cm the laughing kookaburra is one of the world's largest kingfishers. Native to south and eastern Australia, they have now been introduced to Western Australia and parts of New Zealand. Although they do catch fish, they hunt mainly on land where they eat reptiles, small mammals and invertebrates. The cacophony of loud hooting laughs from which they get their Aboriginal name, is often produced by several birds in chorus. The cackling call is one of the few exotic bird sounds that is recognised around the world: a captive kookaburra named Jacko became a radio celebrity in Australia through his ability to break into that laughing call on demand. By the time of his death in 1939 he was one of the best known birds in the world.