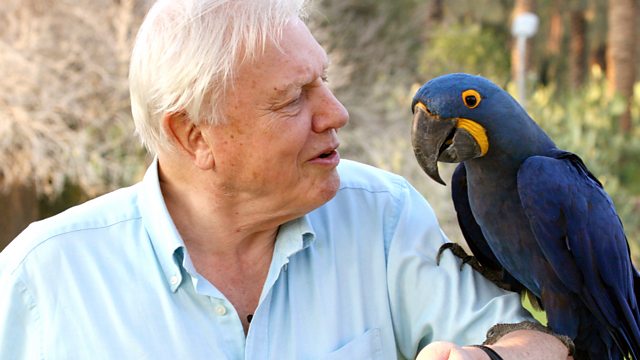 Sir David Attenborough presents the hyacinth macaw of the Brazilian Pantanal. Raucous ear-piercing screeches are produced by one of the most beautiful parrots in the world, flying high over the marshy wetlands of the Pantanal. As their name suggests they are a rich cobalt blue, with sulphur-yellow eye rings with a massive bill and long elegant tail-feathers streaming behind them in flight, making them our longest parrot. Popular as captive caged birds, they are now endangered in the wild and legally protected in Brazil. They feed on palm nuts, including those of the acuri palm which are so hard that even the macaw's powerful bill can't break into them, until they've first passed through the digestive tracts of cattle.