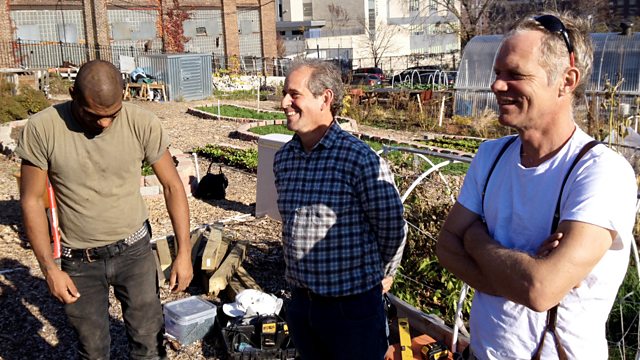 New York's south Bronx is still one of the city's most deprived areas. Sheila Dillon meets Karen Washington, a woman who is using food and farming to transform her neighbourhood.

New York's south Bronx is still one of the city's most deprived areas; low incomes, unemployment and health problems abound. In the 1970's it captured headlines for a "burn for hate" policy that appeared to have taken hold; abandoned (and sometimes occupied) buildings were set on fire and raised to the ground. Entire blocks were destroyed giving the borough, in some eyes, the look of a war zone.

In recent years the changes that have unfolded in the Bronx have been significant. In part the progress made, making the area more desirable to live in, and home to a more united community, can be put down to food. New York City has had a network of public gardens where food can be grown dating back to the 1880's but in recent years, this resource has taken on new meaning, and in the Bronx it's changed lives.

Sheila Dillon meets Karen Washington a woman who's using food and farming to transform her part of the Bronx through "the Garden of Happiness", a three-quarter acre abandoned lot that she turned into an "urban farm" back in 1988. It's gone from strength to strength and this garden, in which Mexicans, African-American, Asian and Caribbean neighbours come together to grow food, has changed a part of the south Bronx for good.

In the programme Karen Washington explains why the garden has not only become a valuable source of fresh food but has also helped solve many of the social issues in the neighbourhood.

Sheila also speaks to Marcel Van-Ooyen, head of Grow NYC, a part of the Mayor's office in New York, to hear how the city's gardens have also become part of an anti-obesity strategy.

Get Ahead Treats for Christmas