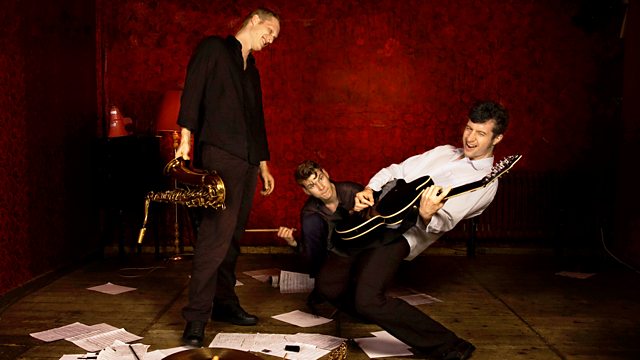 Hyperactive Kid and Starlight perform at the 2014 EFG London Jazz Festival in a double-bill that shows off the vibrancy of today's jazz scene in Berlin.

Underpinning the sounds of this week's programme is drummer Christian Lillinger - one of Germany's most exciting and energetic young players, who also featured recently on Jazz on 3 with his large ensemble Grund. Here taking to the stage at London's Vortex, it's a focus on the trio setting that allows his prowess at the kit to shine.

Lillinger is joined by Philipp Gropper on saxophones and Ronny Graupe on 7-string electric guitar in Hyperactive Kid - a band together now for over a decade, who tackle free-flowing and agile music with a typically restless spirit. And in Starlight, the drummer is met in the low frequencies by Swedish-born bassist Petter Eldh - known for causing a stir in groups such as Django Bates' Belovèd. With alto saxophonist Wanja Slavin completing the line-up, they explore spiralling grooves and layered rhythmic interplay with the intent to "mess with people's heads and give the jazz mainstream an alternative".

Jazz in the Round: 2014 EFG London Jazz Festival