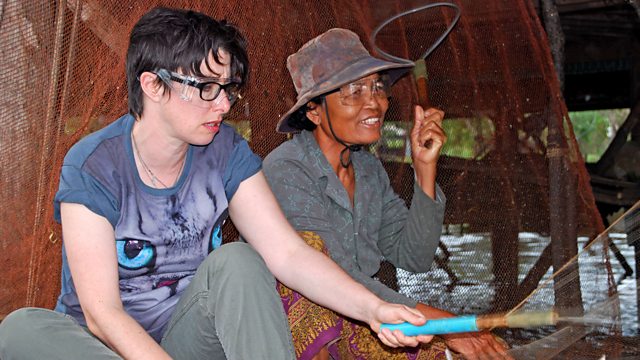 The Mekong River with Sue Perkins
Episode 1 of 4

Sue Perkins embarks on a 3,000-mile journey up the Mekong, Southeast Asia's greatest river. She begins in Vietnam and continues on to Cambodia.

The Mekong is Southeast Asia's greatest river, the ‘Mother of Water’ that brings life to millions of people from the paddy fields of Vietnam to the mountains of the Tibetan Plateau. In this series, Sue Perkins goes on an extraordinary journey, spanning nearly 3,000 miles, to explore lives and landscapes on the point of enormous change. Across four episodes, she travels upstream through Vietnam, Cambodia, Laos and China, towards the Mekong's source high in the Himalayan glacier.

Sue's epic journey begins in Vietnam, on the vast Mekong Delta, where she joins Si Hei, queen of the noodle. Starting at dawn, Si Hei and her eager new apprentice head out to sell noodle soup at the Delta's largest floating market, Cai Rang, a centre of commerce on the river that has endured for centuries. But communist Vietnam has one of the fastest growing economies in Southeast Asia, and change is coming to millions of people who live along the river. Vietnam is the world's second largest exporter of rice, so Sue moves upstream to work with farmers Hung and Tuk in the paddy fields and find out how their lives are changing with the prospect of capitalism.

Travelling up river, Sue crosses into Cambodia and its capital Phnom Penh, which lies at the confluence of the Mekong and the Tonle Sap River. It is a place tainted by the horrific genocide carried out by Pol Pot and the Khmer Rouge. At the S21 detention centre, Sue meets one of only two of its prisoners still alive today, Chum Mey, before visiting the infamous genocide centre, known as the Killing Fields.

To complete this first leg of her journey, Sue immerses herself in the lives of the people of Kuampang Pluk, an extraordinary village of stilted houses on Tonle Sap, the largest freshwater lake in Asia.

See all episodes from The Mekong River with Sue Perkins