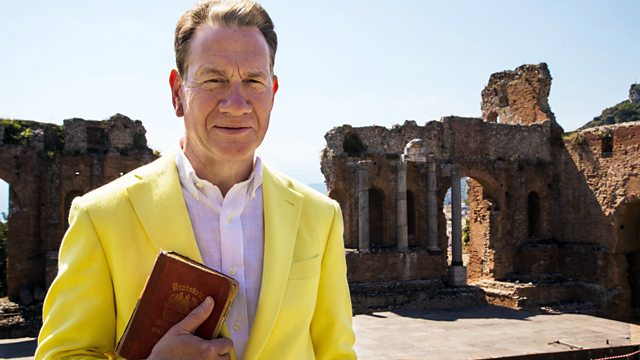 Michael Portillo takes the train down the spine of Italy from Rome to Sicily, visiting Naples, the island of Capri and the ancient hilltop town of Taormina.

Michael Portillo takes the train down the spine of Italy from Rome to Sicily.

Braving the traffic, Michael begins his Roman holiday by weaving among the capital city's magnificent landmarks on the back of a 1950s Vespa. Following in the footsteps of early 20th-century British tourists, he pays homage to the romantic poets at the foot of the Spanish Steps before boarding the train south.

Arriving in Naples, Michael savours spectacular views across the bay. He finds out about the first railway to be built in the country, from Naples to Portici, around the base of Vesuvius and then plucks up his courage to venture into the mighty volcano's crater.

From Naples, pausing only to pick up a pizza, Michael boards a ferry to travel to the beautiful island of Capri, a magnet for the writers and artists of Europe at the time of his guidebook.

Heading south again on the long journey to Reggio Calabria, Michael shares lunch on board with fellow British travellers before their train is loaded onto a ferry for the short sail to Sicily.

On the island, Michael finds out about apocalyptic scenes at Messina only five years prior to publication of his guidebook and marvels at the survival - and beauty - of the ancient hilltop town of Taormina, in the shadow of Mount Etna.