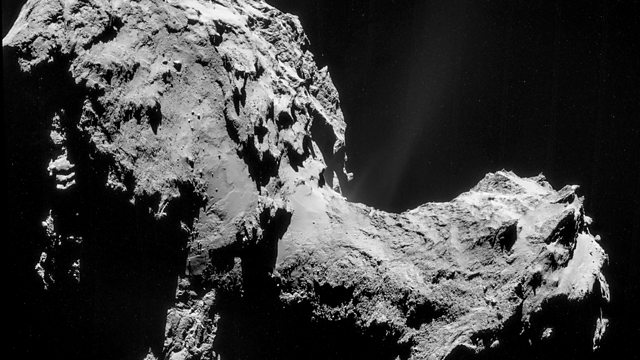 Jonathan Amos presents the latest news on the Rosetta space mission, as it attempts to land a probe on Comet Churyumov-Gerasimenko.

In August, the Rosetta spacecraft was the first to go into orbit around a comet; its images of the extraordinarily rugged landscape of this 4 kilometre space mountain of ice and space dust have already left everyone awestruck. Previous missions have been fleeting fly-bys.

On the day of the landing the orbiting mothercraft released a small robotic probe, named Philae, to fall and land on the cometary surface. It will be the first to sample and analyse directly the make-up of a comet, and photograph a comet's landscape from an explorer's eyeview.

Jonathan Amos presents 'Frontiers' from mission control at the European Space Operations Centre in Germany on the day of the landing.

The probe's deployment is not the final stage of the Rosetta mission. The mothercraft will accompany Comet C-G for the next year as both approach the Sun and then turn back out into deep space. Rosetta will be making measurements all the way as the comet's icy nucleus heats up and produces its great tail of gas and dust. Flying Rosetta as the comet becomes florid will also be a tricky business.

Comets are widely believed to be made of material unchanged since the planets came into existence, 4.5 billion years ago. They represent the original stuff of which planets were built. The Rosetta orbiter's and lander's findings may well tell us whether comets brought water and life's chemical ingredients to get life started on Earth. Jonathan talks to mission scientists and other comet experts about why they want to study comets in such detail and what Rosetta should tell us about comets in their own right as the most spectacular and most enigmatic objects in the solar system.