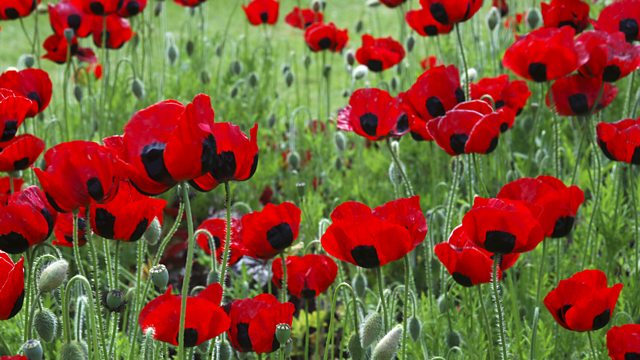 Texts and music remembering those who died in war over the last century, with readers Simon Russell Beale and Hattie Morahan. With Heaney and Brooke, plus Ravel and Barber.

This week’s Words and Music is Remembrance – the music and poetry of the years leading up to war, the outbreak, displacement and the aftermath of conflict. Although the focus is on the losses suffered in World War One you’ll also hear music and poetry from other wars of the twentieth century.

Remembrance begins with Douglas Guest’s setting of Laurence Binyon’s poem, ‘For the Fallen’, written within a month of the start of World War One, with its familiar words heard every year at the ceremony at the Cenotaph:

‘They shall grow not old, as we that are left grow old:
Age shall not weary them, nor the years condemn.
At the going down of the sun and in the morning
We will remember them’.

This is heard alongside ‘The Soldier’, Rupert Brooke’s sonnet written in the voice of a soldier who has died in conflict. At home many female poets wrote of loss. Margaret Postgate Cole’s ‘The Falling Leaves’ reflects on the despair she feels on what she sees as the pointless loss of the ‘gallant multitudes’. The Angus poet Violet Jacob lost her only son Harry during the Battle of the Somme in the summer of 1916. Here, the song setting of ‘Hallowe’en’ tells of a ploughman whose comrade has been lost in the war.

Michael Longley’s poem, ‘In Memory of Charles Donnelly’, remembers the Irish poet who died fighting for the Republicans in the Spanish Civil War. The olive trees under which he lies are echoed in Samuel Barber’s musical setting of Stephen Spender’s poem, ‘A Stopwatch and an Ordnance Map’.

In August 2006 the Israeli writer David Grossman’s son Uri was killed during his national service when his tank was hit by a rocket in southern Lebanon. An extract from Grossman’s extraordinary elegiac book about loss and love, ‘Falling out of time’ is heard with Gideon Klein’s Duo for Violin and Cello.

Written only two months before his death, Seamus Heaney’s ‘In a Field’ was written in response to Edward Thomas’ poem, ‘As the Team’s Head Brass’, composed shortly before Thomas requested a posting to the front where he died in Arras in 1917. Heaney’s poem imagines a farmer in a field, his day’s work done, joined by one who appears in his army uniform to lead him to those who have died in war. You’ll hear it with George Butterworth’s beautiful setting of A.E. Housman’s ‘Is my team ploughing?’ sung by Benjamin Luxon. George Butterworth died in the Battle of the Somme on August 5th 1916.

‘The End’ by Vera Brittain, the writer who lost her brother and her fiancé in the First World War, expresses her hope that they will meet again. The programme ends with ‘Let us sleep now’ from Benjamin Britten’s ‘War Requiem’ and Samuel Barber’s setting of the ‘Agnus Dei’.