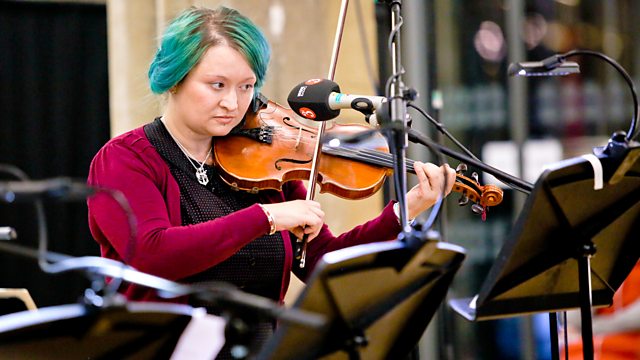 Actors Jonathan Keeble and Sian Thomas are joined by the dazzling folk singer Eliza Carthy, the innovative saxophonist, composer and Radio 3 New Generation Artist Trish Clowes, members of Royal Northern Sinfonia and pianist Kate Thompson for a special live edition of Words and Music. The programme takes the theme of this year's Free Thinking Festival of Ideas, 'the Limits of Knowledge', with readings from Douglas Adams to Thomas Hardy and Kant to Ogden Nash. Music includes Messiaen's 'Quartet for the End of Time', Bach and Bartok, plus folk songs from Eliza Carthy and improvisations from Trish Clowes.

Today’s edition of Words and Music comes live from St Mary’s Church in Gateshead as part of Radio 3’s Festival of Ideas, Free Thinking.  I have taken the theme of this year’s festival, ‘the limits of knowledge’, and my very first thought was Emanuel Kant’s Critique of Pure Reason, which sets out the first philosophical enquiry into the faculty of reason and the limits of knowledge.  Kant draws a distinct line between a posteriori knowledge – what we can ascertain through empirical experience – and a priori knowledge - the universal knowledge that we have independent of experience, such as mathematics.

What do we know?  How can we be certain that we really know what we think we know?  These are the questions that many writers ask beside Kant.

But rather than taking Kant as the starting point, the poems and prose that I have chosen for this programme start from the idea of the beginning of knowledge as represented by the innocent empirical stance of John Clare saying, ‘I feel I am, I only know I am’, Stephen Hawking asking what we know of the universe and why we think we know better, and the scene from Genesis in which Adam and Eve first become aware of their nakedness.

The texts that follow illustrate our growing sense of self-knowledge, from Hardy’s song ‘known had I what I knew not when we met eye to eye’, Francis Quarles’ Funeral Elegy 10, in which knowledge teaches us to know ourselves, and Alexander Pope’s poem, Know Thyself.

How do we acquire knowledge?  Why do we need to acquire knowledge?  Umberto Eco writes about how the purpose of the monastery in The Name of the Rose is to preserve and not to search for knowledge, ‘because the property of knowledge, as a divine thing, is that it is complete and has been defined since the beginning.’  Eco is followed by Sherlock Holmes musing about the amount of knowledge a man requires in order to do his work, and Ogden Nash’s brilliantly funny poem, Ask Daddy, He Won’t Know.

The programme culminates with the limits of knowledge as outlined by Kant, followed by Chuang Tzu, who asks, ‘what’s the point of gaining a great deal of knowledge?’, and John Donne who shows that ‘the soules ignorance in this life’ is ‘knowledge in the Next’.

We still have much left to discover and the programme ends with a quote from The Encyclopedia of Infectious Diseases which starkly underlines the current limits of mankind’s knowledge.

The musicians in today’s programme have worked with me to find music that reflects each of these texts.  Trish Clowes begins and ends the programme with the ethereal sound of her saxophone improvisations.  She also works alongside the two actors, Jonathan Keeble and Sian Thomas, to create an aural universe in which they recite Ortiz’s poem, Culture and the Universe.  Eliza Carthy has unearthed a comedy song called Useful Knowledge, which illustrates how the folk canon does philosophy, and a sweet song called Pulling hard against the Stream which follows beautifully from Alexander Pope’s Know Thyself.  Members of the Royal Northern Sinfonia and pianist Kate Thompson are playing a range of music, from the driving opening of the third movement of Elgar’sString Quartet in E minor, which fits with Sherlock Holmes, to a movement from Messiaen’s Quartet for the End of Time, a musical intimation of the limits of knowledge.