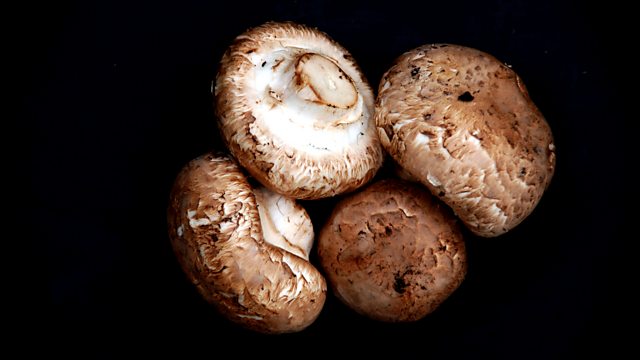 From the eryngii to the not-so-humble button, Dan Saladino discovers a world of mushrooms, grown for food, from Europe's biggest mushroom farm to a spawn plant and far beyond.

From the king oyster to the not-so-humble button, Dan Saladino discovers a world of mushrooms, grown for food - and follows the spores to reveal the secrets of mycelium, hunts for the perfect mushroom sandwich, and finds that there is one species in particular that dominates the supermarkets and our kitchens.

With more types of cultivated mushroom available in the UK now than there has ever been, Dan hears about Korean mushrooms grown in jars, visits Europe's biggest mushroom farm, and tracks down the biggest global company in the ultra-specialised world of spawn production.
Dan also encounters a photographer whose street-food mushroom project inspired him to create a new type of imagery - the 'fungi luminogram', gets insights from Eugenia Bone - author of 'Mycophilia' - and Paul Stamets, legendary mycologist and advocate of mycelium. There will also be plenty of butter and garlic.

Paul Stamets' TED Talk: 6 Ways Mushrooms can Save the World