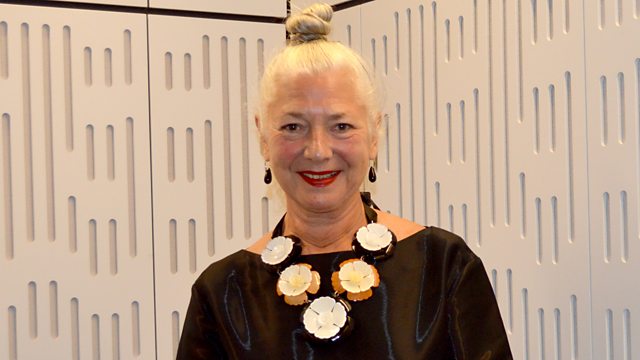 Kirsty Young talks to Wendy Dagworthy, who recently retired from her role as professor of fashion at the Royal College of Art.

During her time as Head of Fashion at both Central St Martins and The Royal College of Art she has taught students who've gone on to great success - Stella McCartney, Erdem and Antonio Berardi among them. Her skill lies partly in understanding the significance of a well cut pattern or a nicely turned seam, but also the warp and weft of a notoriously fickle industry.

At just 23, she was the toast of the catwalks with her own label selling round the world and worn by the likes of Bryan Ferry, Boy George and Mick Jagger. Dubbed 'the high priestess of fashion', her creative talent, however, wasn't recession-proof and her business went under in the late 80's. Given that reinvention is the lifeblood of fashion it seems she was tailor made for a new direction; collecting her O.B.E. in 2011 for services to the fashion industry, she wore a Perspex hat designed by a former pupil.

She says, "we want students to take risks - like we did when we were younger. There were no set rules, there was no one to follow - you just did it yourself."