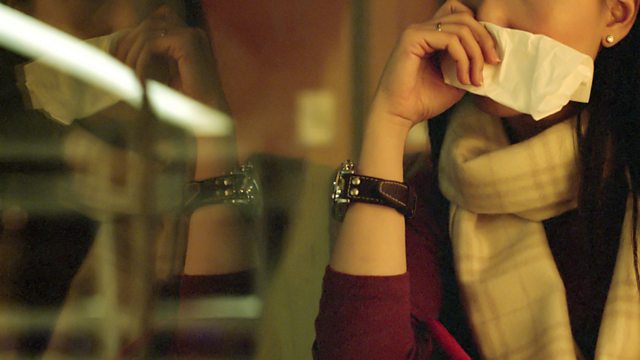 15 Minute Drama My Life with Flu
Episode 5 of 5

October 2014: Can an old familiar face at the chemists be a last shot at happiness for the 71-year-old Jill? Stars William Hope.

A love story, about flu.

It's October 2014 and Jill is now 71. When she runs into an old familiar face at the chemists, she has one last shot at happiness. But the flu has other ideas.

Written by Sarah Woods, My Life With Flu has been produced in collaboration with the Wellcome Trust Sanger Institute.

In this omnibus of five episodes, it follows the story of Jill across five decades as she struggles with the highs and lows of life, love and viruses. At the same time the story tracks the life of Hong Kong Flu – how, over 45 years, it has traversed the globe, evolved and is ultimately being superseded by new, more virulent strains, such as Swine Flu.

The series uses cutting edge science – of transmission, viral evolution and genetic predisposition – to tell the story of flu, and investigate the unique qualities of Jill's genome which make her a 'severe responder'.

Paul Kellam, Virus Genomics team leader at the Sanger Institute worked closely with writer Sarah Woods to weave the science seamlessly into the story. The drama underlines the deep connection human beings have to the viruses that survive through us, and how illness can shape the course of our lives.

Episode 4—My Life with Flu