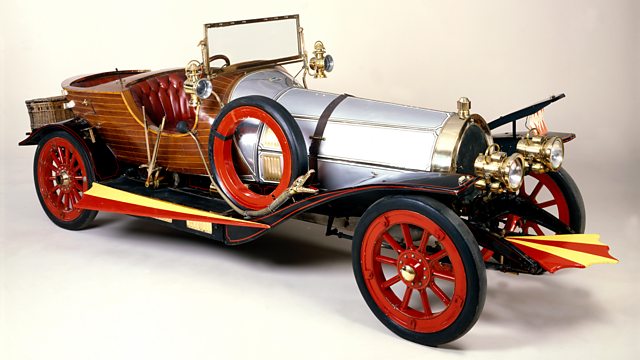 Most of us know the film of Chitty Chitty Bang Bang with its inventor father, Caractacus Potts, the twins Jemima and Jeremy and their adventures in their flying car. But few realise that Ian Fleming's original book is quite different. Potts was 'Pott' (or Crack Pott) in the book, the original manuscript's adventures take place in Kent and Northern France, and it was screenwriter Roald Dahl who added the characters of the Child Catcher and Truly Scrumptious.

Brian Sibley speaks to Fleming's nieces, Lucy Fleming and Kate Grimond, and to Ian Fleming bibliographer Jon Gilbert, to hear how Fleming's only children's book was written and published.

Fleming told the original story aurally to his son Caspar, and he only decided to write it down long hand when he was convalescing after serious illness. The book coincided with the last years of Fleming's life and contain some of the elements of the Bond Books – a great adventure story at its heart and the love of cars. The vehicle itself was inspired by Fleming watching the racing at Brooklands and a legendary driver called Count Zborowksi, who had a car named Chitty Bang Bang.

Brian Sibley goes to Brooklands to take a spin on the old race track, as well as talking to original illustrator John Burningham and the writer of the sequels, Frank Cottrell Boyce. He also catches up with legendary composer of the film score Richard M. Sherman.