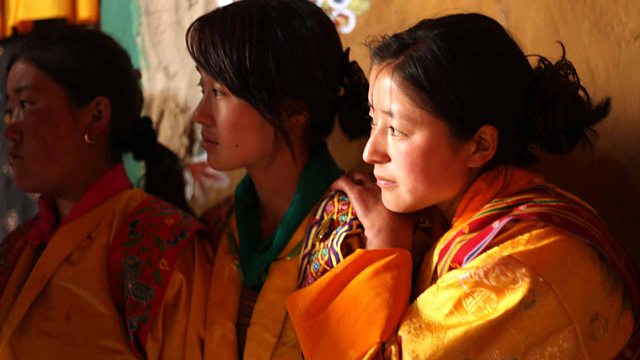 On Language Location
Episode 1 of 2

Linguist Mark Turin tracks down some of the world's endangered languages. In the first of two programmes, he explores the remote Himalayan kingdom of Bhutan.

Bhutan is a landlocked country in the eastern Himalaya, best known as a Buddhist kingdom where the policy of 'Gross National Happiness' replaced GDP. Anthropologist and linguist Mark Turin has special access to enter Bhutan as part of a major collaborative research project to document the country's endangered oral traditions. He is there to help identify which of Bhutan's languages and cultures are most at risk as the country opens up to global influences through television and the internet.

Mark takes a journey from Thimphu, the capital, across high mountain passes, to the village of Ura in rural Bumthang district. There he participates in a dramatic five-day festival of rituals and fire dances. He meets members of parliament, teachers, and broadcasters who speak not only Dzongkha, the national language, but English and their local indigenous languages. Along the way, Mark learns more about the challenges facing communities who live in Bhutan's remote valleys.

A journey through the cultural and linguistic landscape of the Buddhist kingdom of Bhutan, presented by anthropologist Mark Turin.

See all episodes from On Language Location