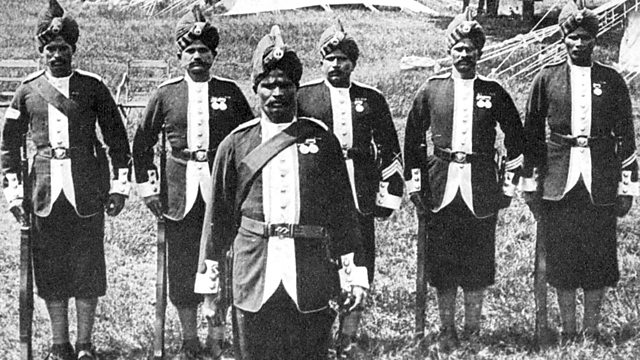 Soldiers of the Empire
Episode 1 of 2

4 Extra Debut. Santanu Das explores how over a million Indians were recruited to serve the British Empire in the First World War. From 2014.

Santanu Das tells the story of how one and a half million Indian men - nearly 900,000 soldiers and 600,000 non-combatants -were recruited from the villages and towns of British India to serve the Empire in the First World War.

When India joined the War on August 4th 1914, the powerful native princes and politicians of all sides pledged their support. Colonial adminstrators and local chieftains toured villages to recruit from the so-called "martial races", particularly from the Punjab. Financial incentives were promised and medals were issued to successful recruiters. Singers and poets were hired to entice anyone of fighting age.

Santanu travels to India to meet the grandsons and great-grandsons of soldiers who fought on the western front, Mesopotamia and elsewhere. One speaks with immense pride of his family's help to the Empire in its hour of need; another tells of his sadness at the thought of young men who had only ever handled a sickle, being used as cannon fodder, thousands of miles from home.

In 1917 when the pool of available manpower was drying up, the British stepped up the recruiting drive. Santanu hears tales of coercion, including allegations of water supplies being diverted and even of the kidnapping of wives of men of fighting age.

Of all the colonies in the British, French and German empires, the Indian subcontinent contributed the highest number of men. This is the story of how they were recruited to travel across the Kalopani, the "dark waters", to take part in the world's first industrial war.

A Juniper production first broadcast on BBC Radio 4 in October 2014.

The Fight in Fairyland

See all episodes from Soldiers of the Empire