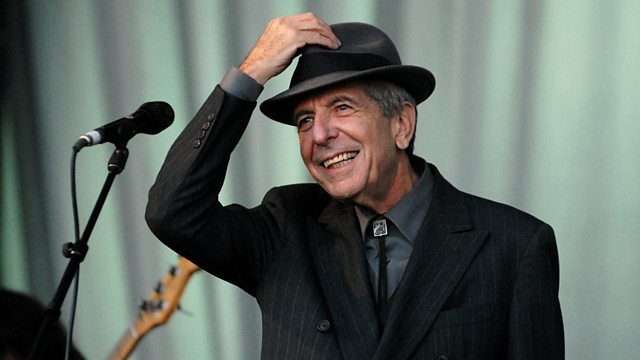 Stuart Maconie hosts a special programme in which he talks to Leonard Cohen about songwriting, the possibility of touring again at 80 and his latest album, Popular Problems.

Stuart Maconie hosts a special programme in conversation with the singer and poet Leonard Cohen covering such subjects as songwriting, the possibility of touring again aged 80, his latest album Popular Problems and how being Canadian informs his outlook and music.

Born in 1934, the Canadian singer-songwriter and poet Leonard Cohen took to the world of the printed word long before putting his poetry to music.

His debut album Songs of Leonard Cohen which contained such numbers as Suzanne, Sisters of Mercy and So Long Marianne was released on Columbia Records in 1967. His second album Songs From A Room followed in 1969 containing the much covered number Bird On A Wire.

After a controversial incident regarding a manager and a large loss of money, Cohen retruned to the live stage in 2008 after a 15 year break. He relased his 13th studio album Popular Problems this month.